My Backyard Kitchen Garden of Dreams

It’s true. I had no idea when I embarked on my backyard kitchen process 18 months ago that it would be so fulfilling. The small, backyard kitchen garden that I have created feels like a dream. It is lush and lovely, something that I both enjoy working in, looking at, and eating from. Even in the winter, when the garden was quiet, having a space set aside and landscaped for garden potential was such an improvement to the previous unfinished and unintentional space.

Here is my Backyard Kitchen Garden from it’s creation (in January 2020…timing, right?) through harvest and planting in March 2021. 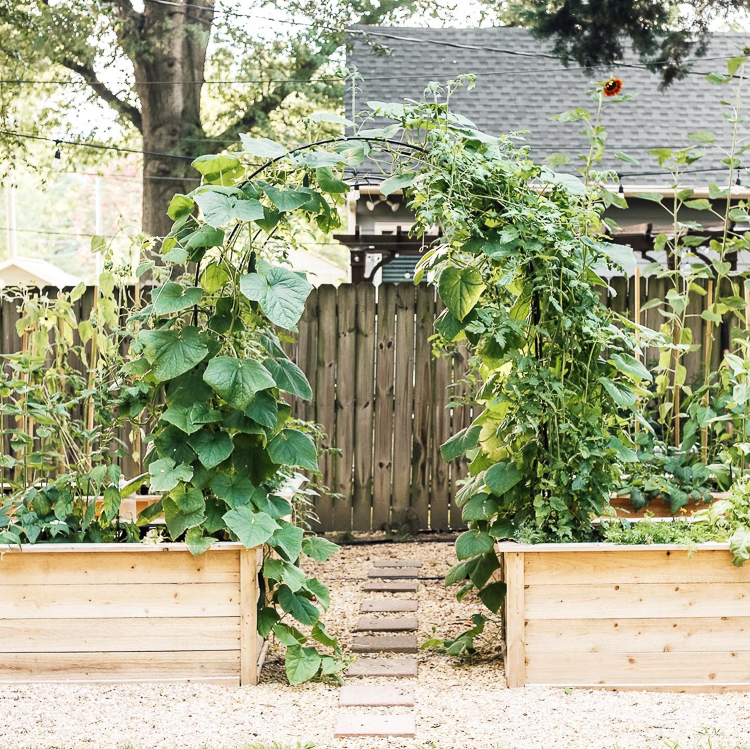 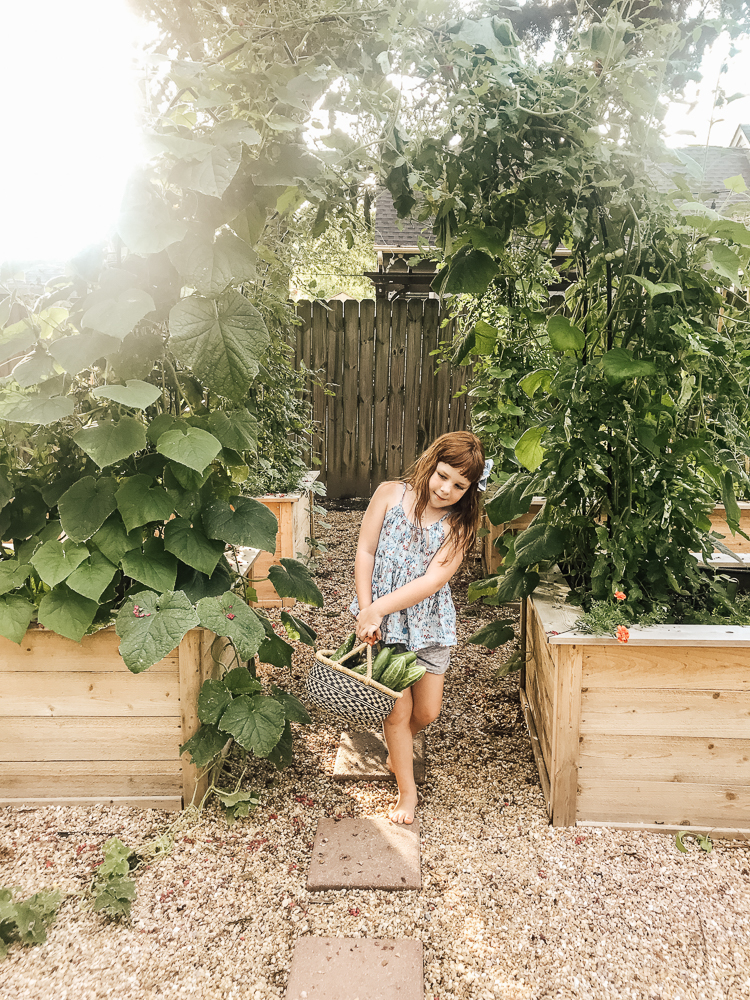 This was the garden-area before it was a garden. Before a garden, it was a chicken coop area. Semi-muddy, semi-afterthought. The main reason the chicken coop was set down on this section of yard is because it was pretty terrible to grow grass on, and was vastly unused.

Now, sunlight is very important in planning a garden, so I made sure that the area where I wanted to plant would get at least 6-8 hours of sunlight per day in the summer, and it (almost) did. So I went for it. 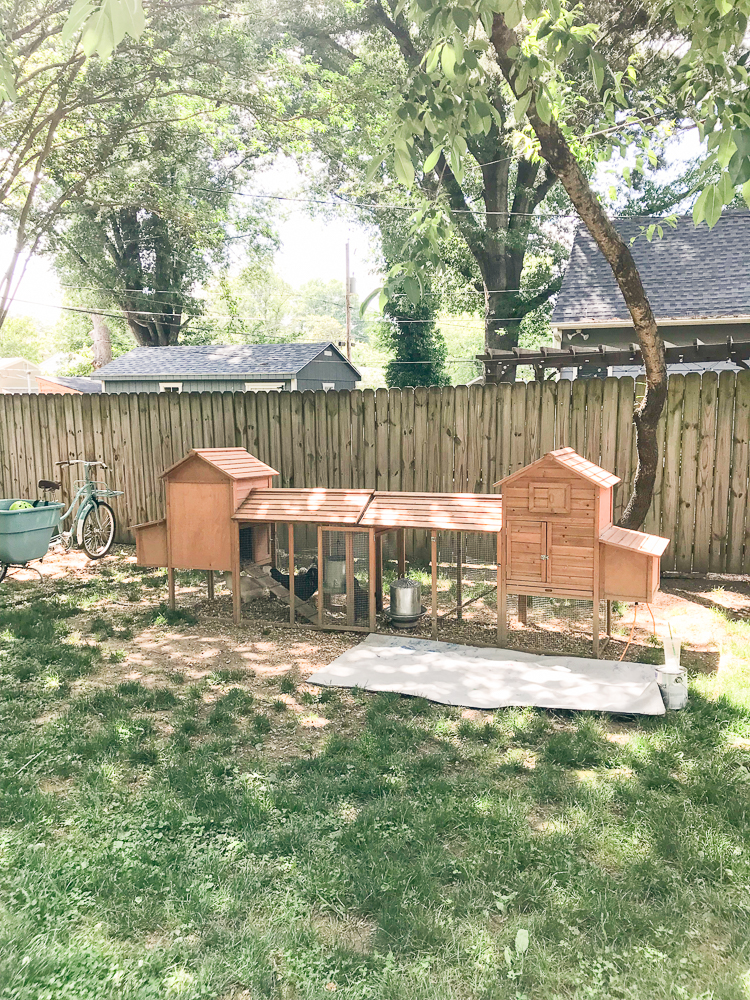 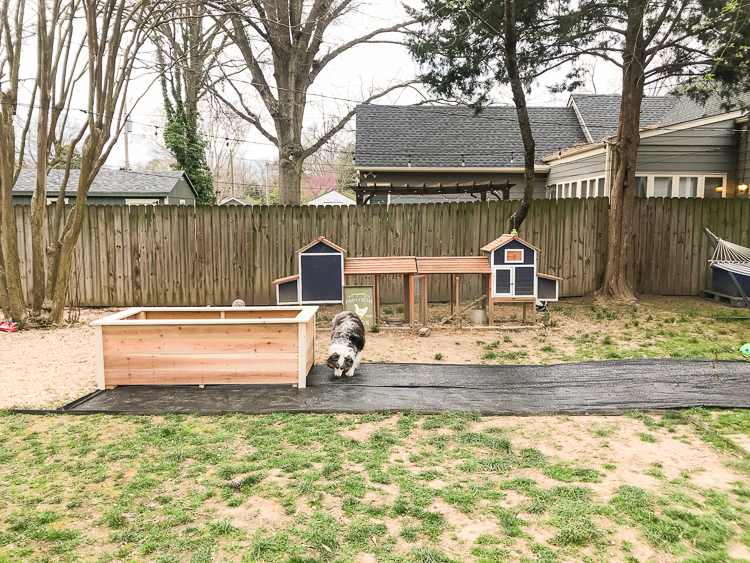 Check out that beautiful, patchy lawn. Ouch. It hurts me to remember how hard the clay, and how intense the mud during our famous Virigina rainstorms. I knew that this quarter of the yard where the kitchen would go would be filled with rock and the grass would no longer be an issue.

I mentioned to one of my best friends, who also happens to be an avid gardener, that I wanted to plant a vegetable garden. She referred me to a few of her favorite garden Instagram accounts, and I stumbled across this image at Gardenary. After I picked my jaw up from the table, I started researching materials to build beautifully trimmed raised garden beds. I also dug deep into online resources for metal garden arches.

Side Note: You can find my $5 PDF plans for these raised garden boxes right here! They’ve been used hundreds of times and the materials are less than $100 per box.

I ended up sourcing my own from a local steel manufacturer who made them to my specifications. At around $400 per arch, they were an investment. I would spend that over and over again for how much I love them. 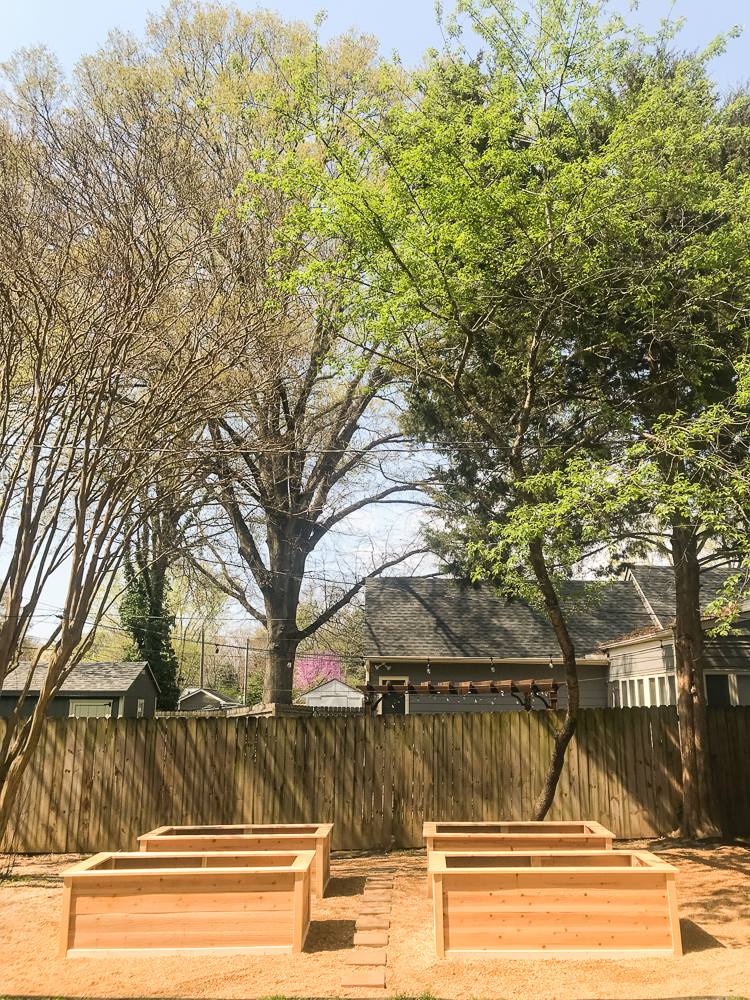 Before planting into the garden beds, I wanted to rehab the whole area. I first moved the chicken coop to the other side of the yard.

Next, I laid weed cloth over all of the existing weeds and grass. No, I didn’t pull out anything, spray anything, or dig. I assumed that laying down the cloth and a couple inches of rock would keep the weeds and grass at bay. It has been super effective and saved a lot of work!

I built four raised garden beds, and added wire cloth to the bottoms to prevent critters. I don’t know if it was worth the work–but I haven’t had any burrowing animals!

The concrete stepping stones are an inexpensive way to add some design and ease to the area. I found these for about $3 each at Home Depot, and have loved them.

Finally, the hardest part was hauling and spreading the 3 tons of pea gravel into the yard.

Side Note: In my 2021 garden update, I added 1-2″ river rock on top of the pea gravel. I much prefer the larger rock size. It stays in place better and looks nicer. I would do that first if I had a do-over.

I began planting this garden way back in January, before I had even built the boxes. I interviewed my good friend Melissa for the podcast and she shared some of her favorite gardening tips.

My neighbor, who is another great gardener, told me all about winter sowing—where you plant seeds into translucent containers in January and leave them outside on the patio to germinate. Word on the street (and the internet) is that seeds grown this way are hardier and grow great once they are transferred into the garden.

I planted a dozen varieties of vegetables, fruits, and flowers, into old milk jugs and juice containers. By April they were ready to transplant into the beds. That was perfect timing because the world shut down for the pandemic, and I had plenty of time to dedicate to setting the drip system up and planting. 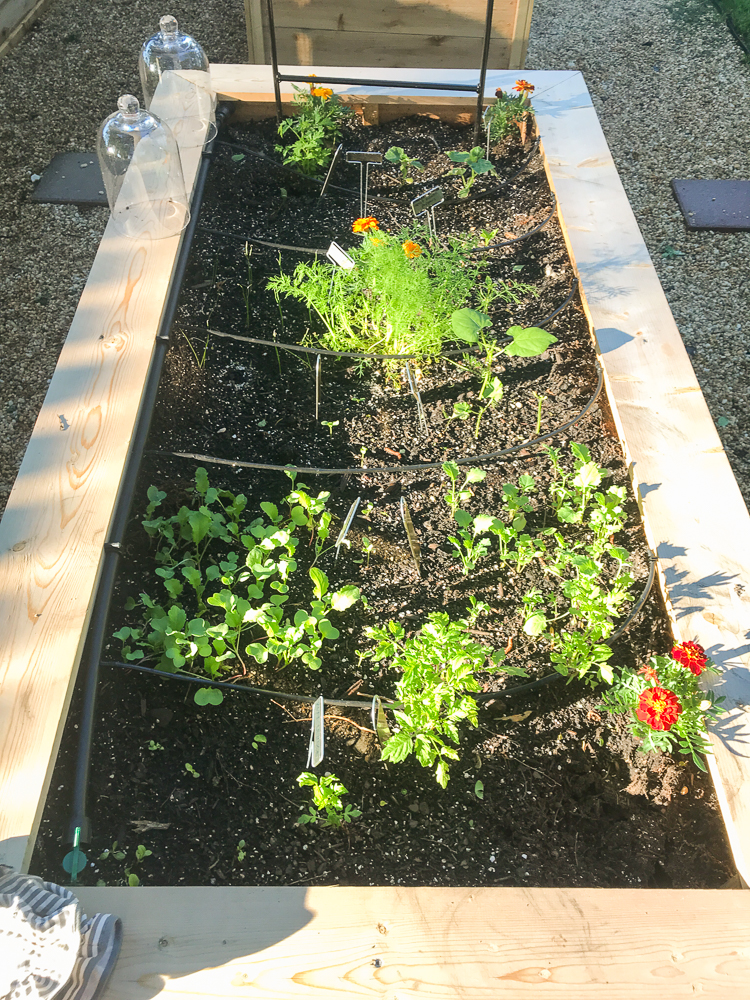 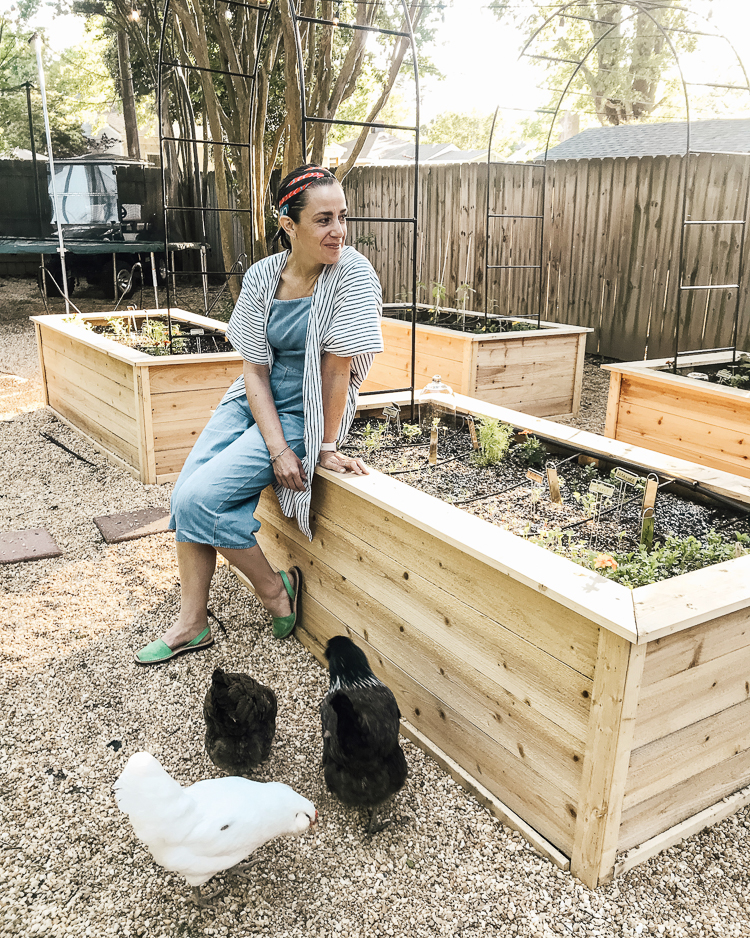 Friends, gardens are magical. Every single month from April to September, I was oohing and ahhing at the progress in the kitchen garden.

First, it was the buds of the radishes and kale that I had direct planted from seeds. Then it was the inches of growth on the tomatoes and cucumber climbing up the arches. I shrieked with joy when the first sunflower popped (at 9’ tall, because I had no idea how huge they would get!) It became a morning ritual to go outside, wander slowly through on the path, and stop to admire the growth. I would watch a ladybug meander along a zinnia leaf, or marvel as a pea flower burst into a four-inch pod, heavy with beans, overnight.

One of my favorite moments of the whole summer was the week where I admired a pair of tiny, fluorescent goldfinches perch on the sunflower leaves to peck at the seeds. They came back day after day, balancing on nature’s ladder, stretching for their sustenance. I was in awe of the micro-ecology I had created in one square foot of this garden corner. 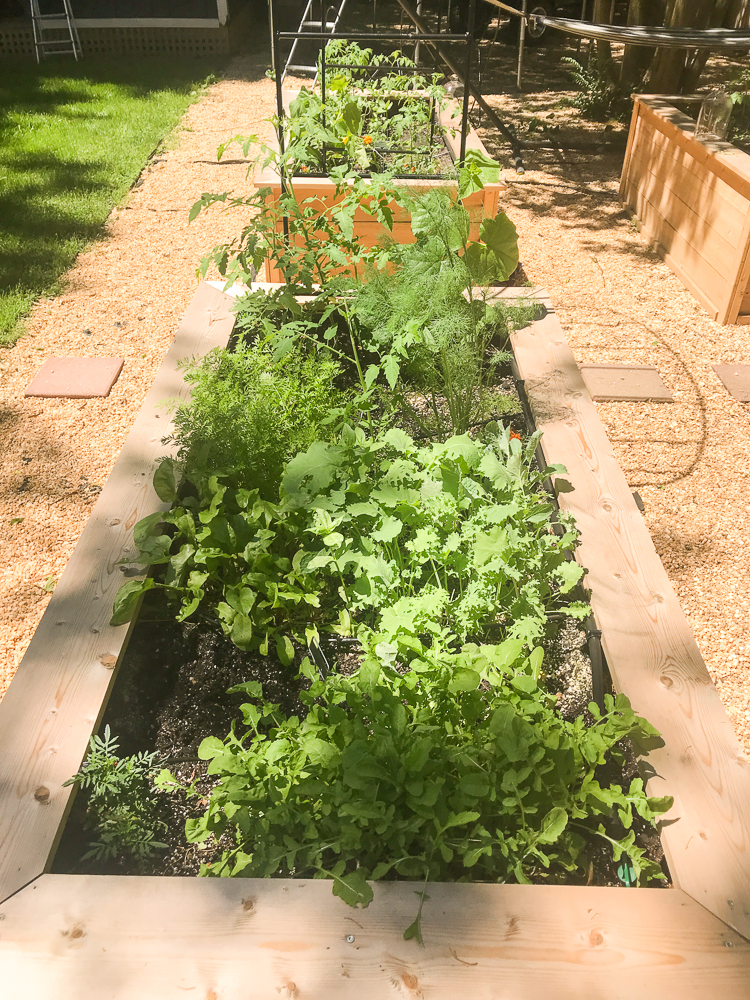 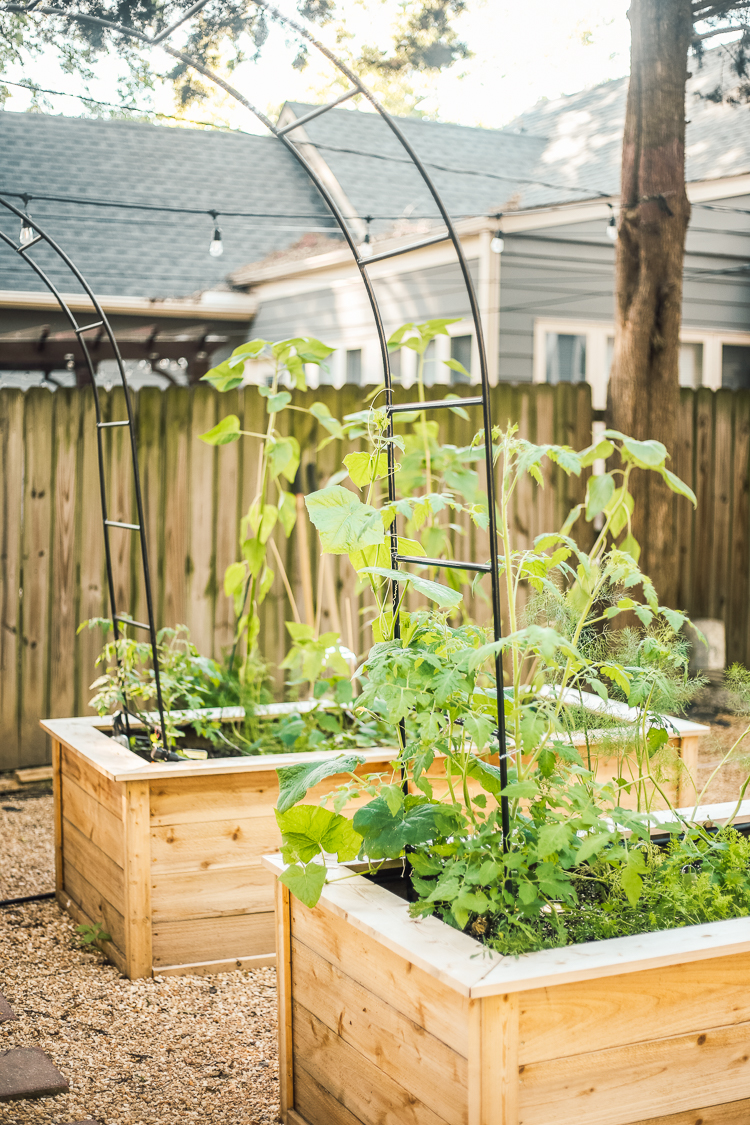 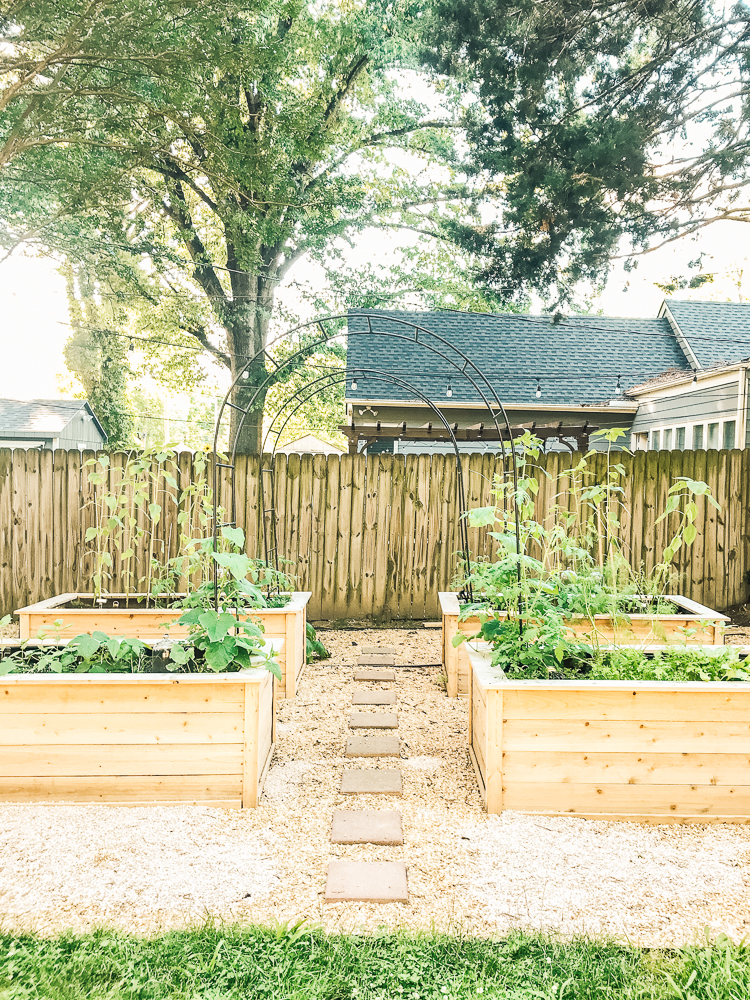 Through April, May and June, I marveled at this incredible process, tying up the tomatoes along the arches, giggling at the way the cucumbers didn’t need to be tied because their tiny tendrils grip and climb independently.

In July, I cheered when the vines from the black cherry tomatoes and cucumbers met in the middle of the top of the arch, completing the beautiful circle. They looked especially whimsical beneath the twinkling bistro lights.

My daughter spent August plucking plump cucumbers from their vines and bringing them inside to slice up, sprinkle with salt, and devour while slightly warm and sun-kissed. 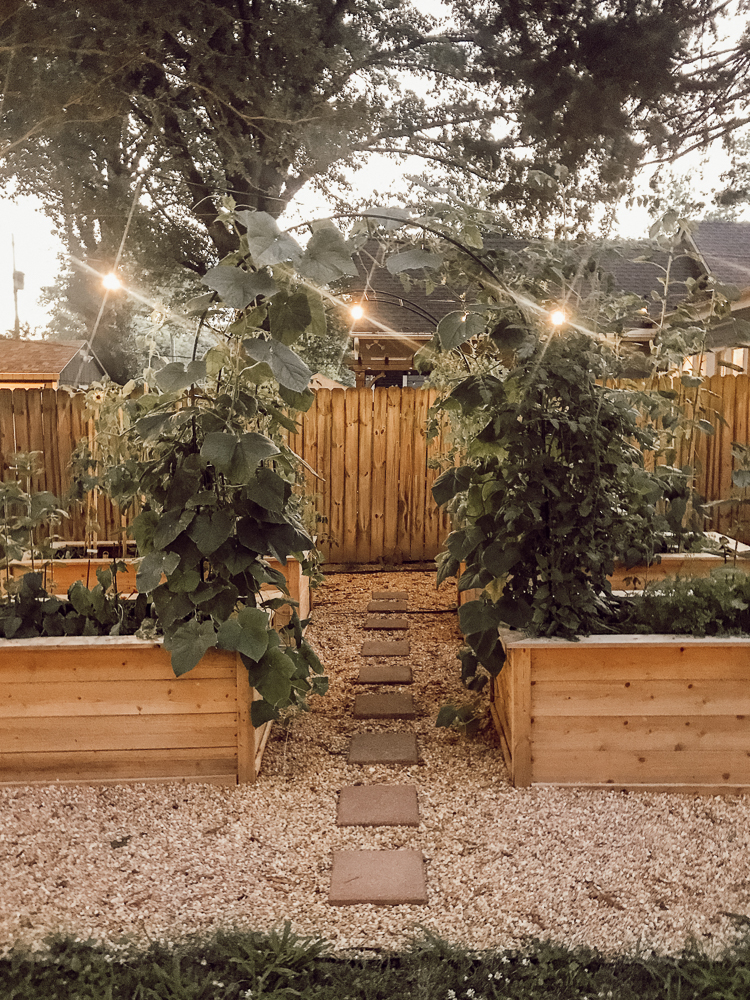 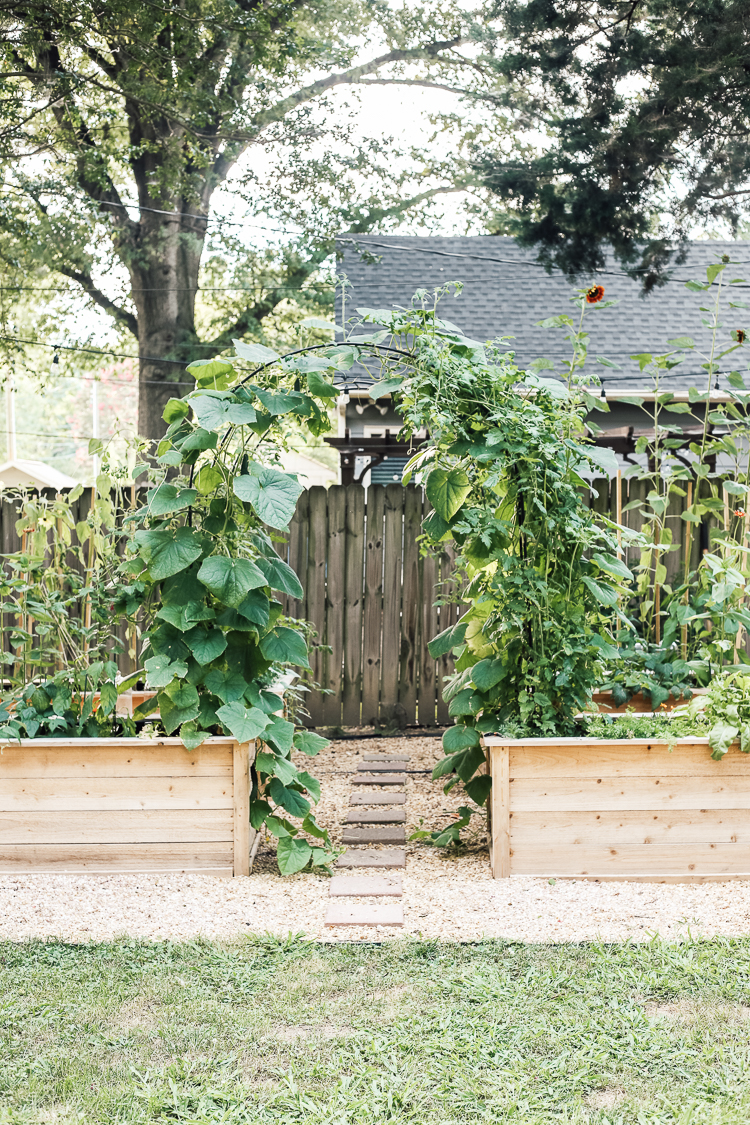 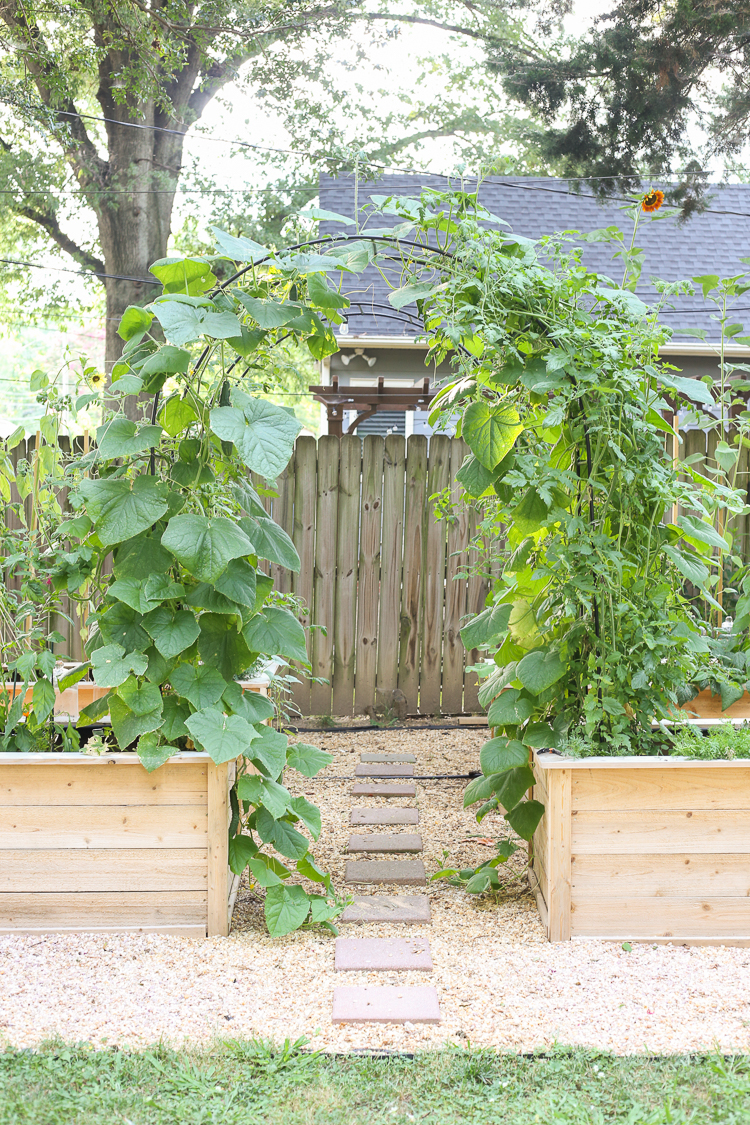 Beyond the cucumber and bush beans, which were the overachievers of my first kitchen garden, the kale mix, arugula, peppers, and tomatoes make great showings. The greens went really well in the early season, before it was too hot.

I was shocked by the time the peppers and tomatoes took to fruit and ripen. I mean, I had almost given up on them, deciding the beautiful leaves were worthy even if the plants didn’t produce a harvest. And then, almost all at once, tomatoes and peppers popped and we collected them for weeks into the fall. 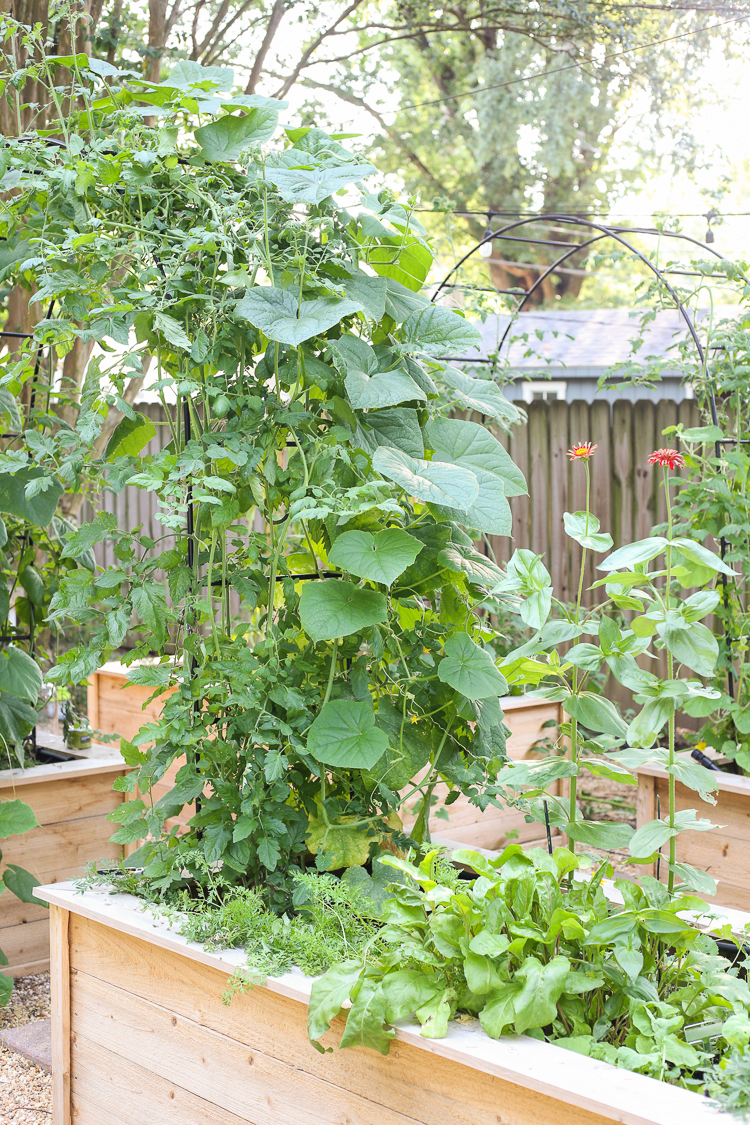 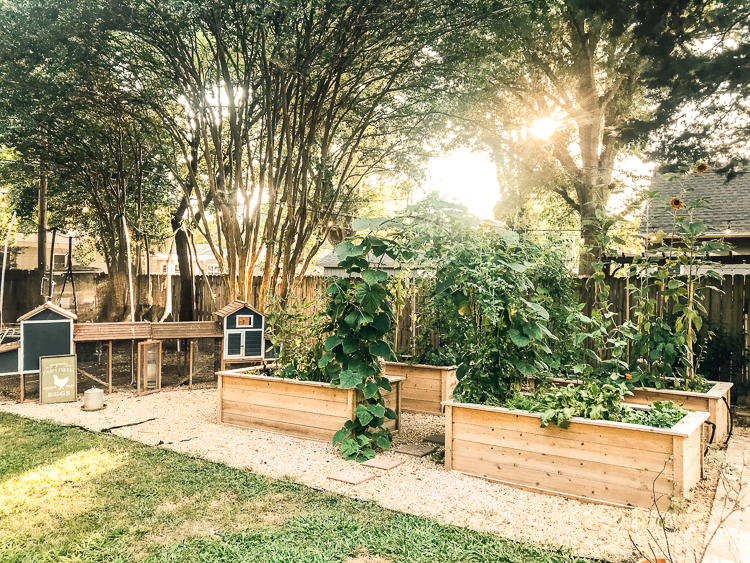 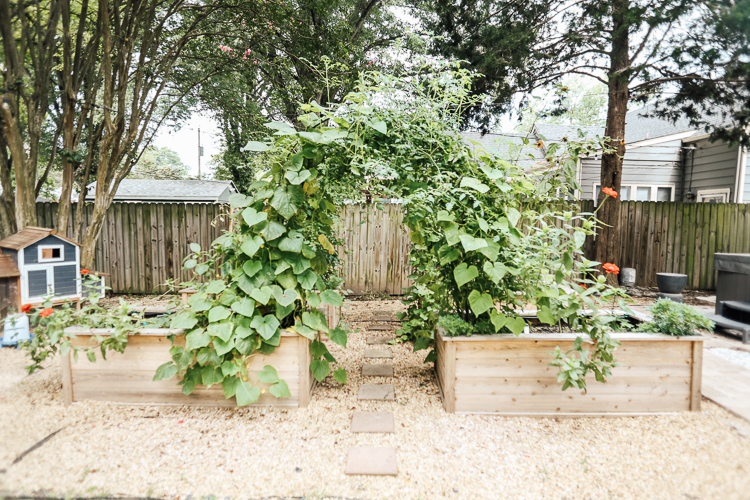 Once the garden was built and planted, I kept wondering “Now what?”

Some trimming, harvesting and truly, mostly, simply enjoying the gorgeous magic of this wild, growing landscape.

At the end of the growing season, as leaves started to dry up, I took an afternoon to trim down the vines, pull out the vegetable plants, and turn the soil. I added a little fertilizer and planted a few winter plants (kale and garlic) and enjoyed the small spots of green during the winter months. 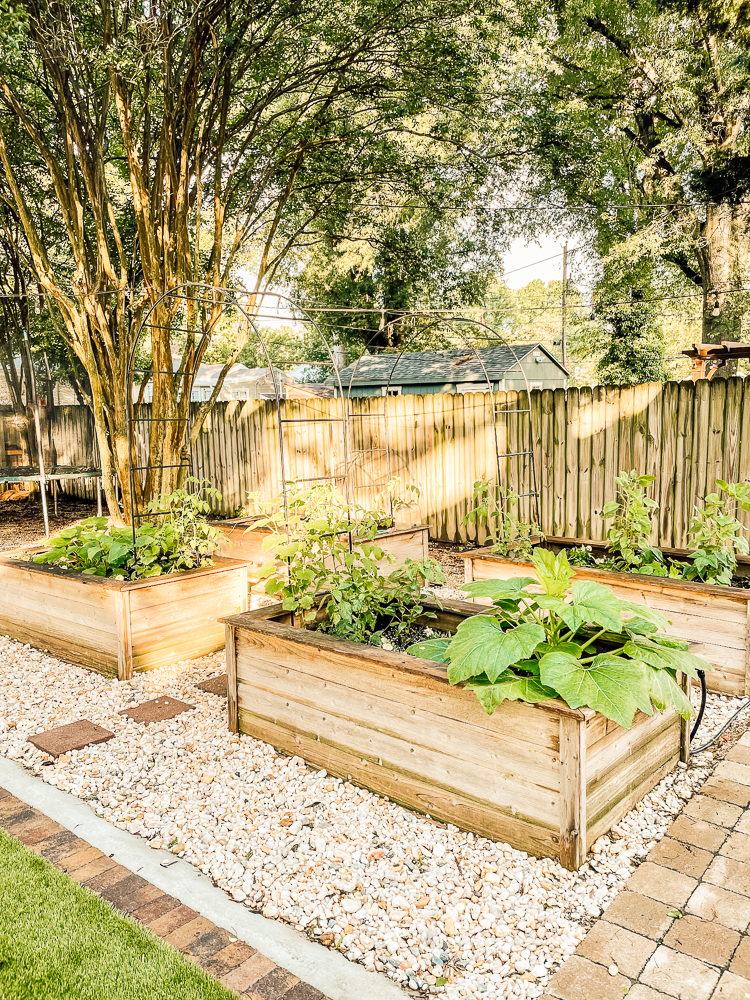 Set Up The Systems

Fast forward to backyard kitchen garden, year two. My winter sowing didn’t work out as well this year. I planted seeds and then set them in an area where they didn’t have correct drainage, so they flooded and died. Oops!

Luckily, I was able to get back on track by visiting a local garden center and choosing plantings that seemed fun for a new garden season. I choose vining cucumber and trailing tomatoes for my arches, because they worked out so well last year.

I also added a crookneck squash to half of one raised bed, shishito peppers, asian eggplant, and bush beans. Sunflowers complete the garden for me (I am anxiously awaiting the return of my goldfinch couple…) 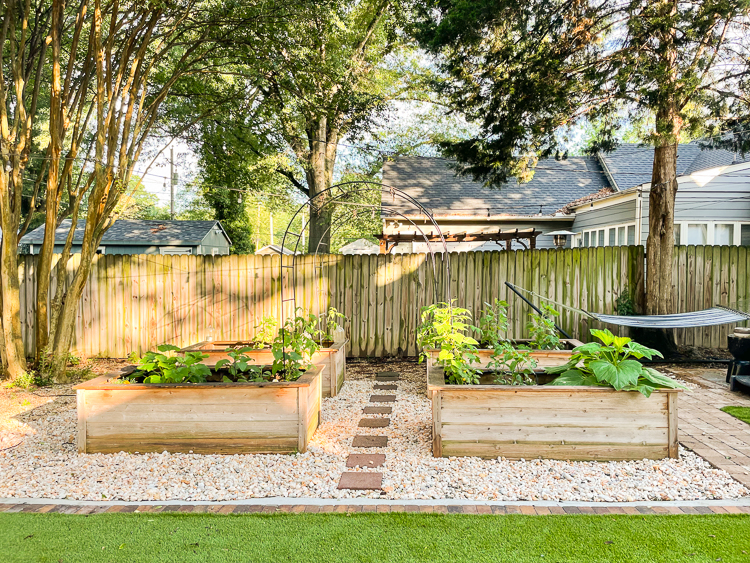 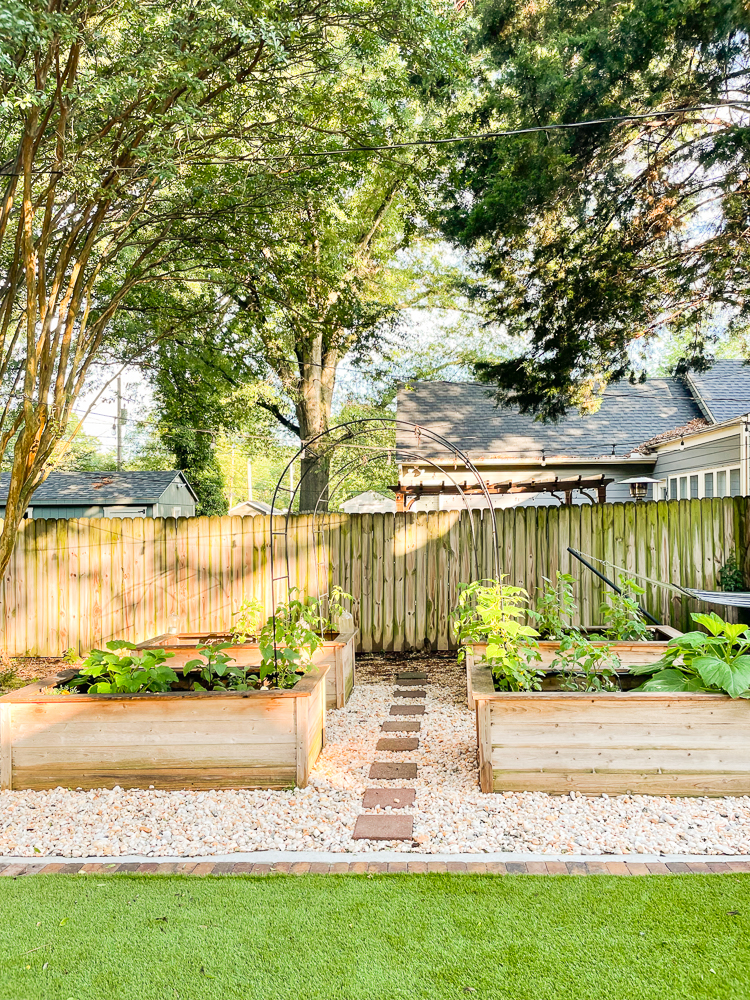 Learning from last year, I made a couple great updates this year. Not to the garden itself, but to the area surrounding it.

The most dynamic related change was upgrading the pea gravel to a slightly larger pond stone. I love the weight and look of them, and they don’t travel so easily throughout my yard. We also added artificial turf to the venter of the yard with a brick edge dividing it from the garden area. This upgrade means the whole area looks amazing rain/shine/summer/winter…there is NO MUD! It’s fantastic.

In summary, this DIY Backyard Kitchen Garden has been an incredible investment in our property, yard, personal development, and spiritual connection to nature. Growing things is witnessing a true creation. It is wild and wonderful. I recommend it to everyone.