Ahhh, summertime. With only a few days until Independence Day and what feels like the middle of the summer, we felt like it was prime time to bust out our Tie Dye skills. A couple years ago I made these Tie Dyed American Flag tee shirts for the family. This year we went big, and tie dyed four big beach towels to tote to the pool on our daily trips! 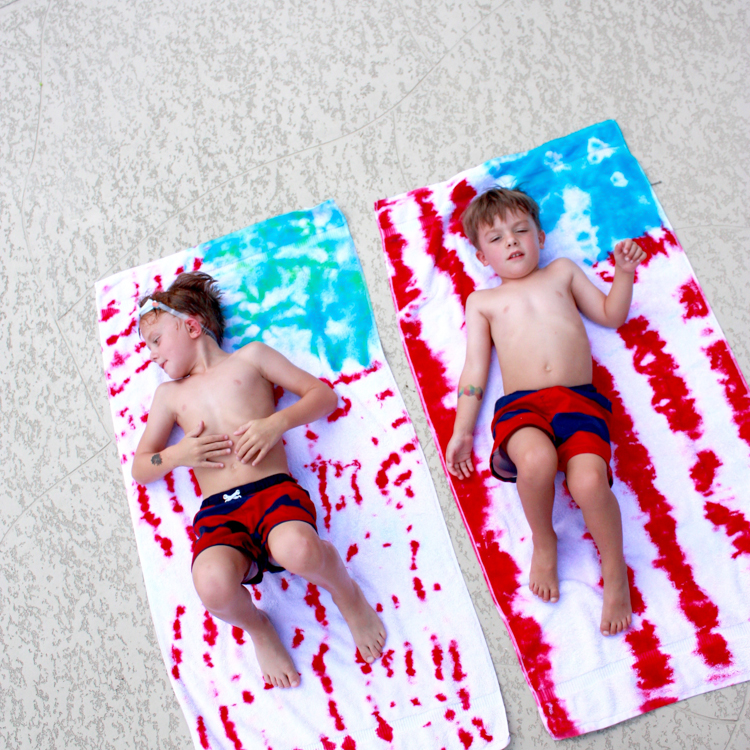 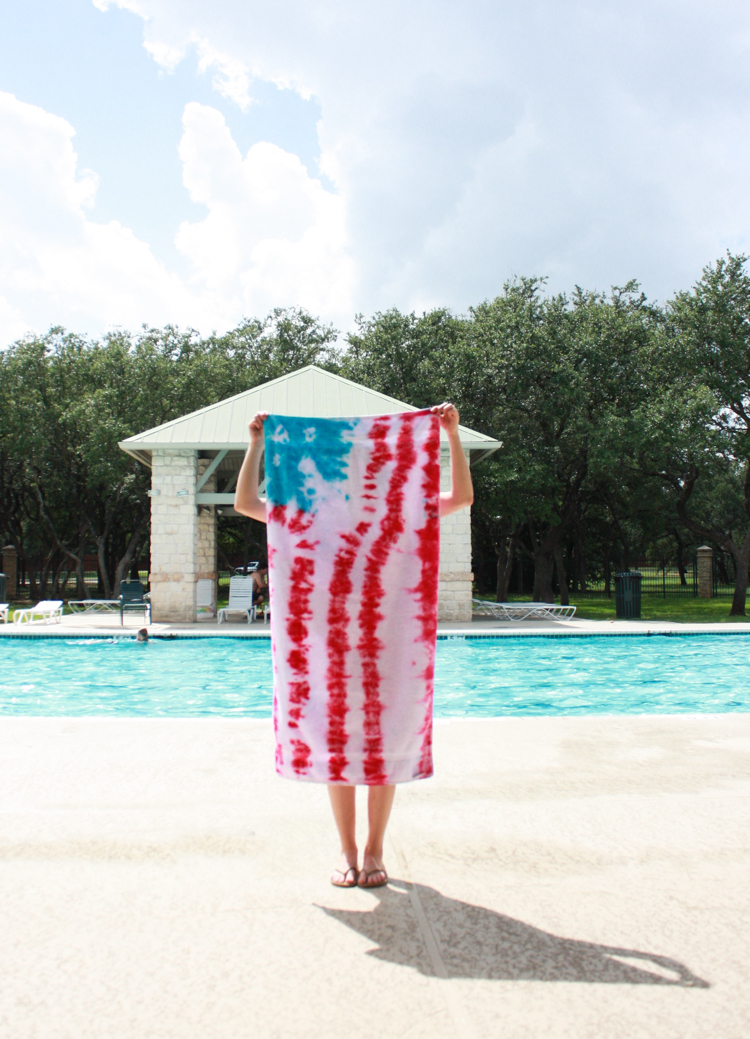 The kids each made their own with a little (lot) of help from me, and they turned out amazing! If your order your two simple supplies today, you could have your own tie dye American flag towels in three days (with 2-day prime shipping, of course!) Let me show you how to do it: 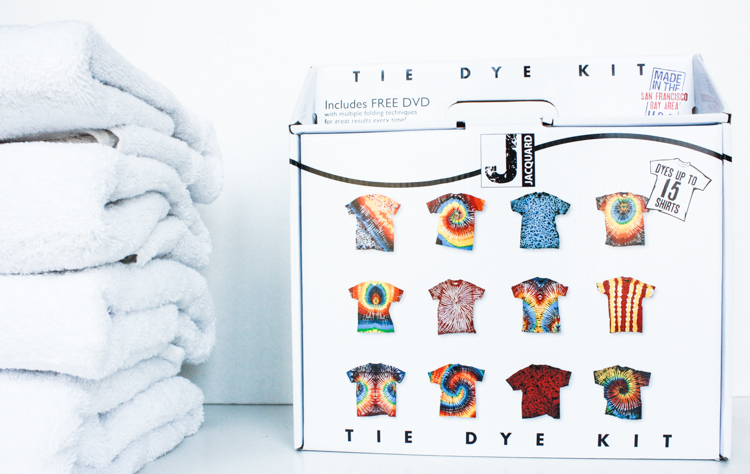 You only need two things:
white towels (I ordered this set of four and they’re great.)
tie dye kit (this one comes with everything you need.) 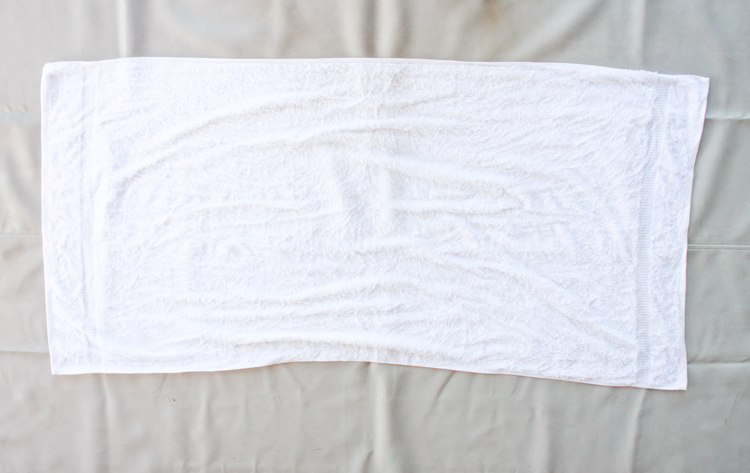 The instructions on the tie dye kit are great, and clear. First you’ll fill a few inches of warm water into a bathtub and add the soda ash. Soak all four towels at once, swishing around until they’re all saturated, then let them sit for 20 minutes. The soda ash somehow sets the dye where you put it. Wring them out pretty well, and then lay the first towel out flat. (side note: I used my Gathre Mat as a water-resistant barrier beneath the towels, and it’s awesome. We actually use it for just about everything messy these days!)

When you’re mixing the dye bottles, use the extra bottle and dump half of the red into it, then fill both bottles with water. You’ll end up with two red bottles and one blue. That should give you enough dye to make all four American Flag towels! 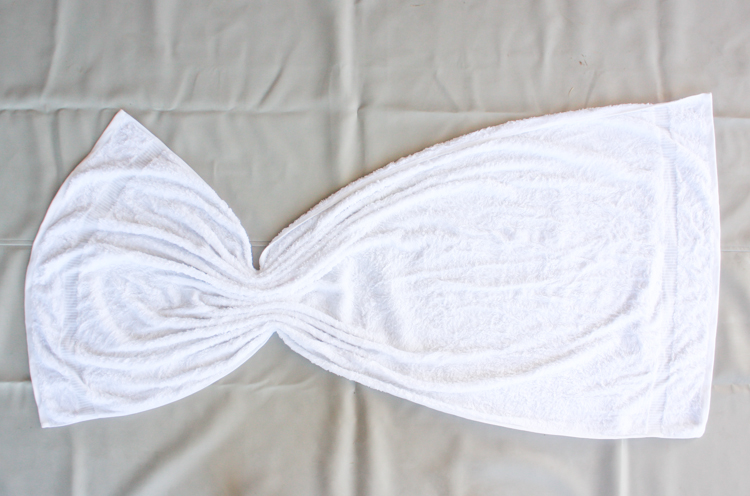 Decide how far you want the blue section of your flag to go, and then make pull the towel together at that point and add a rubber band. 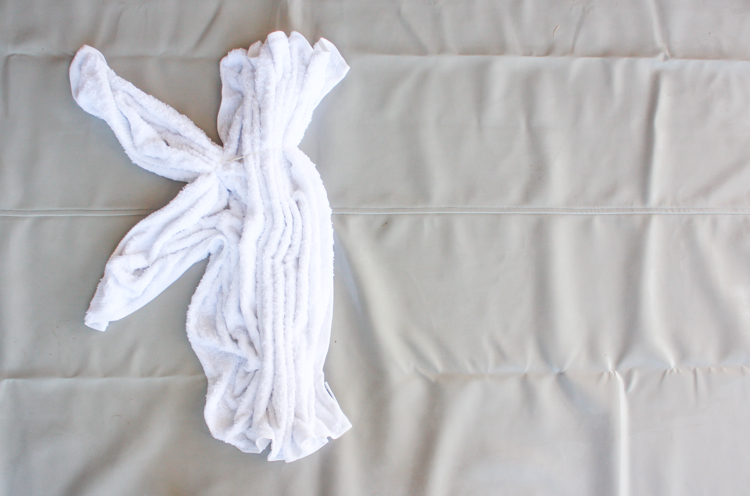 Decide how far down you want the blue widthwise, and then fold the length of the towel in, and wrap a rubber band around the length. That will section off the blue corner of the flag. 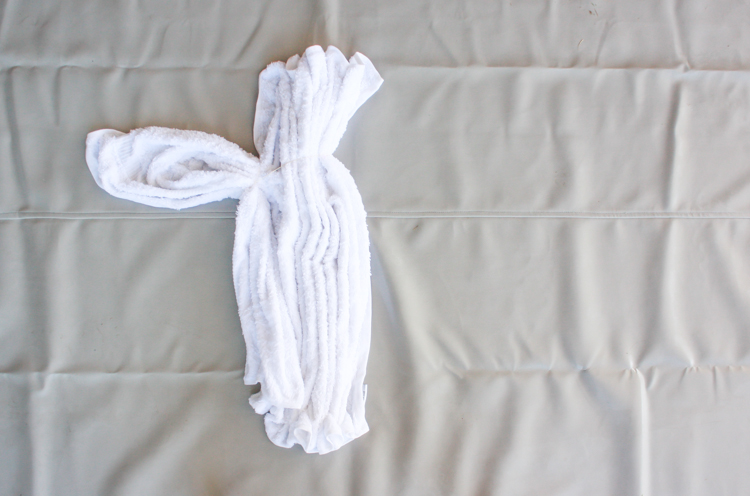 I unwrapped the bottom part of the rubber band so there is only one corner section set apart. Keep the rest of the towel folded into semi-equal sections. Grab a couple little sections in the blue corner to just wrap up with rubber bands and get some spots of design there. You can wrap rubber bands around this whole vertical span of the towel, but since we’re just making straight stripes there, I didn’t. 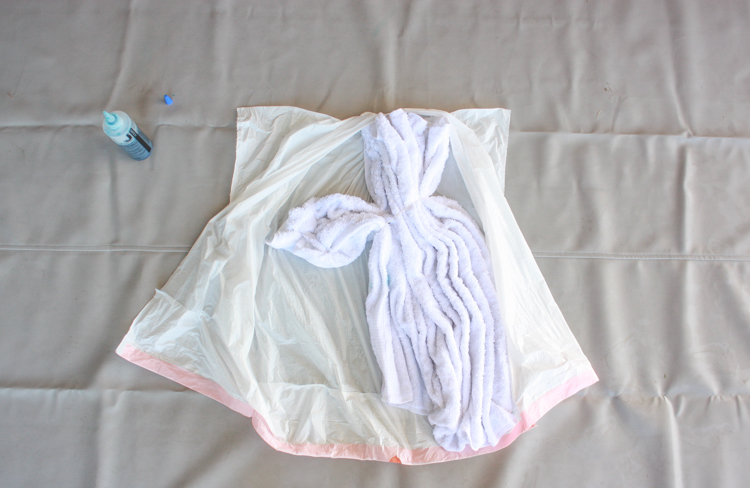 Now it’s going to get really messy, so put a plastic bag beneath the towel and cut the top open so you can access it. You’ll use this bag for the 12-24 hour waiting time while the dye sets. 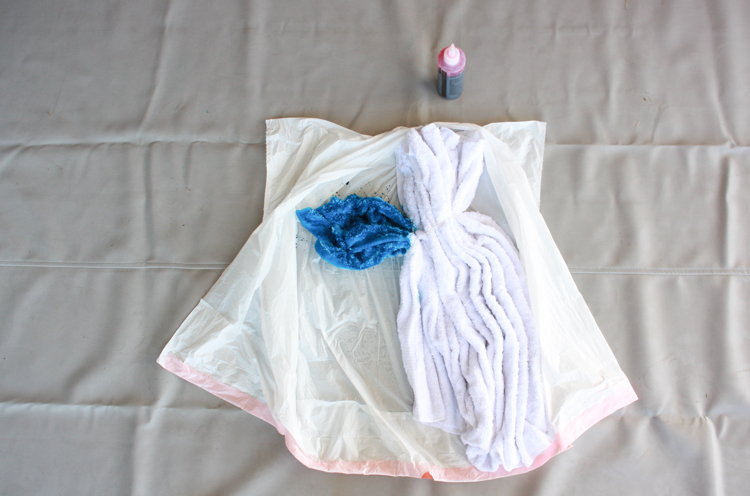 Use the blue dye bottle to saturate the blue corner of the towel. 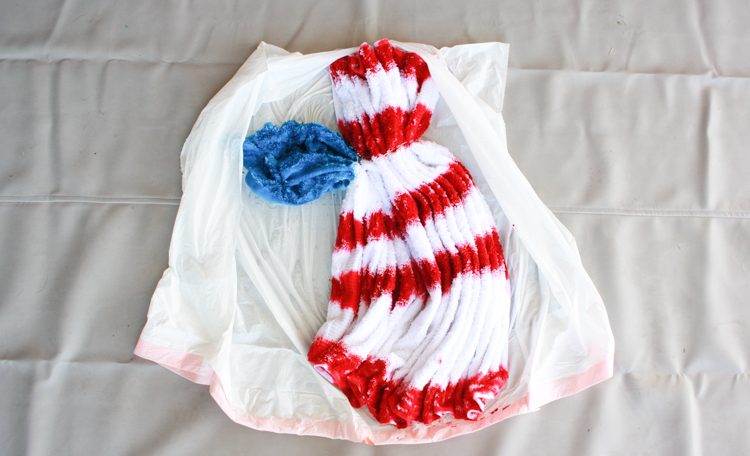 Use the red dye bottle to make stripes along the length of the towel. You can dip the tip of the dye bottle into the folds of the towel to make more continuous stripes. 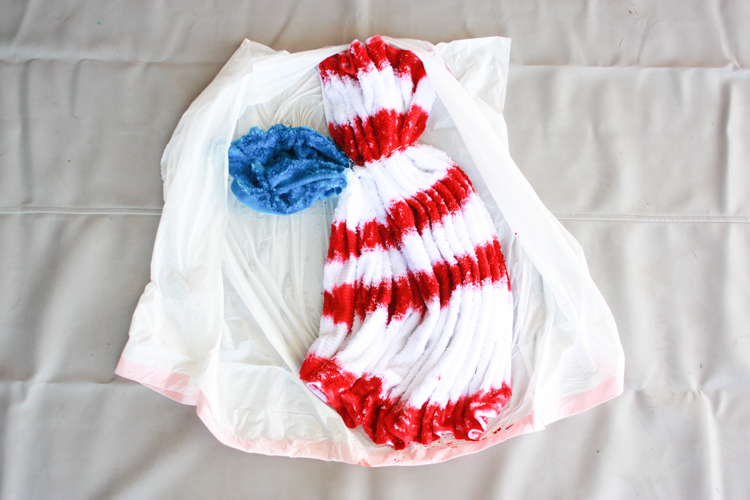 And you’re done with the dye! Repeat on the other three towels, switching up the widths of the blue section or the stripes. as you want to make them different. Wrap the edges of the bag over the towel, and put aside for 12-24 hours. 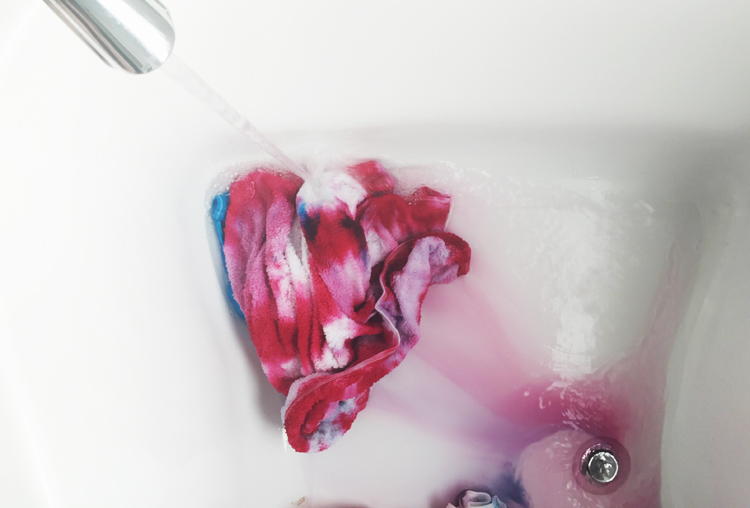 When the rest time has ended, put all four towels into a tub, take off the rubber bands and rinse them out until the water is semi-clear. This will take a little while, and is an excellent arm workout! Go ahead and toss the four towels into the washer with some detergent and a couple color catcher sheets. 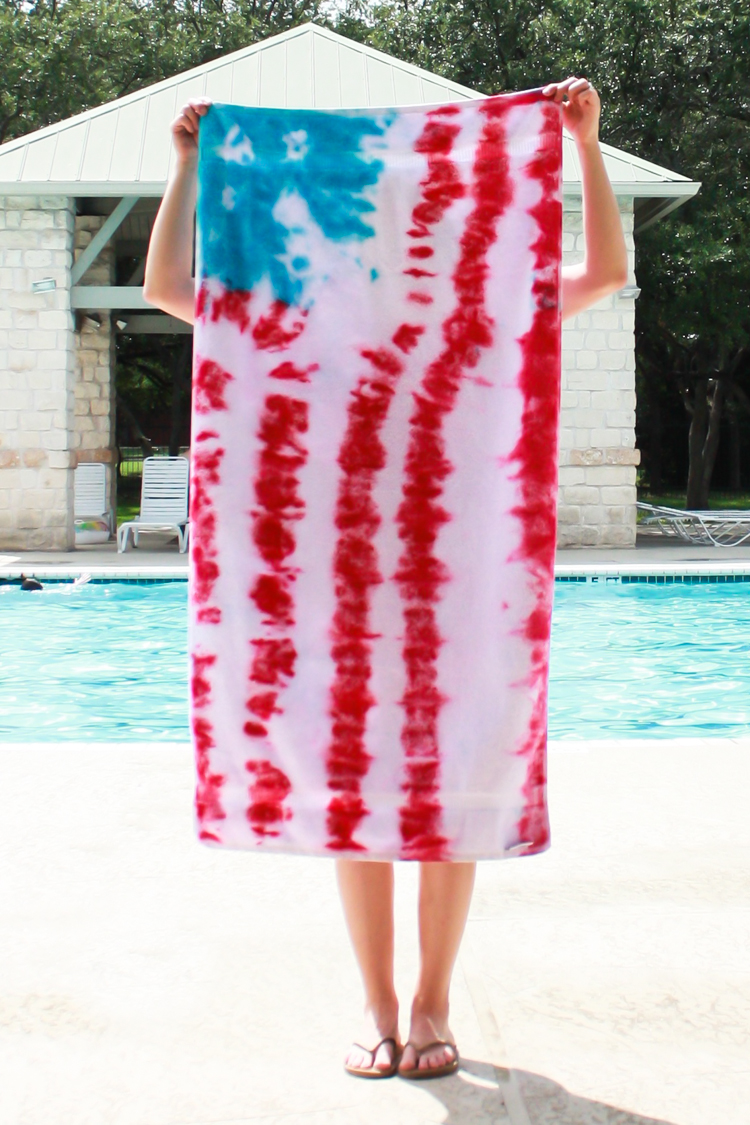 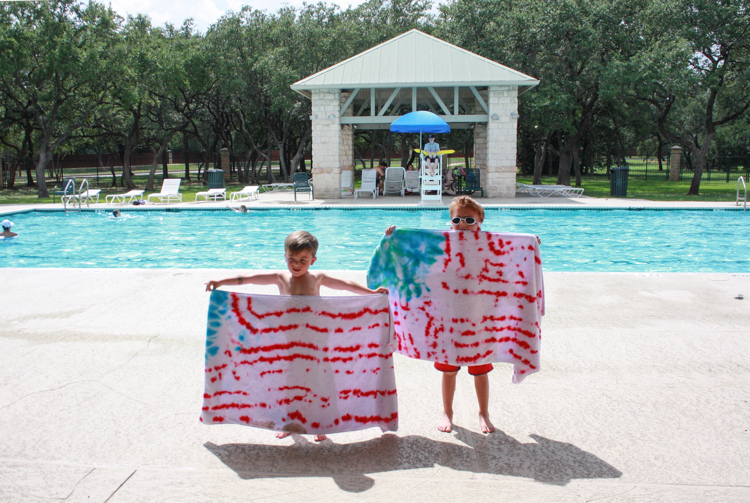 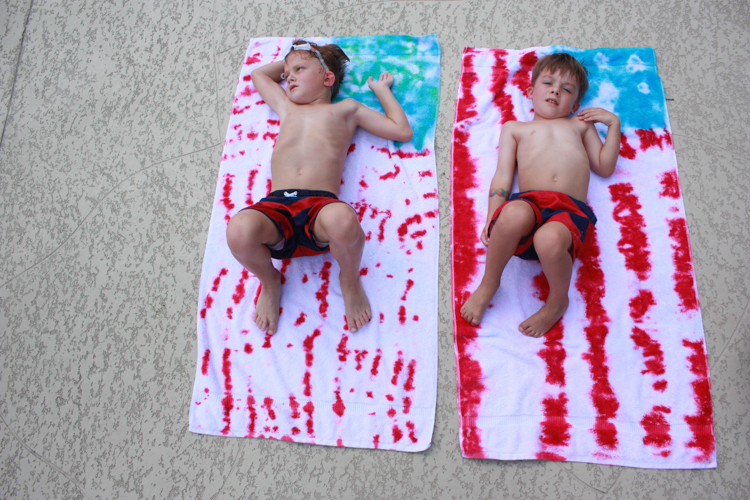 Each of our four towels ended up a little different, and the variation is so fun! Milo put a little green in his blue, Eliot made lots of little stripes, Plum’s towel ended up a long spiral of dye starting with blue in the corner, and the red spiraling out the end. 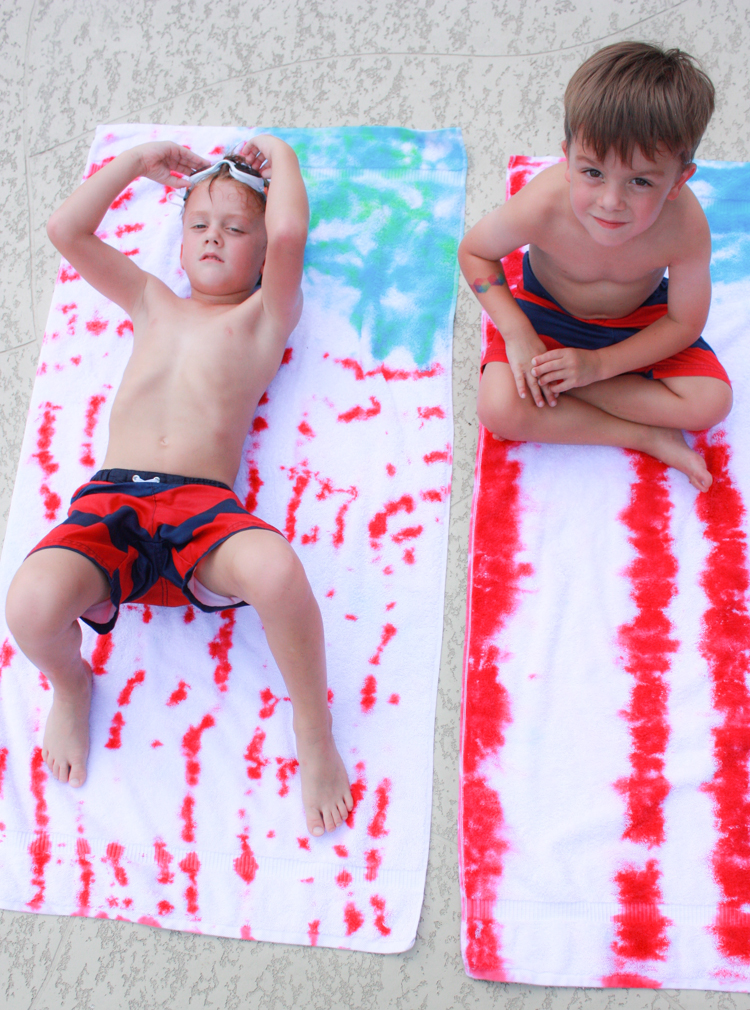 And we’ll be using them all summer long!