Wow! It’s been a while since I talked about food. Partly because I’ve been busy with other things, so the food side of my life has been a little less exciting as of late. Also, I realized it’s hard for me to take photos of meals when we eat them at night, because it is already dark outside, so the lighting is all off! I, for one, am ready for the lighter, longer days of spring to begin. 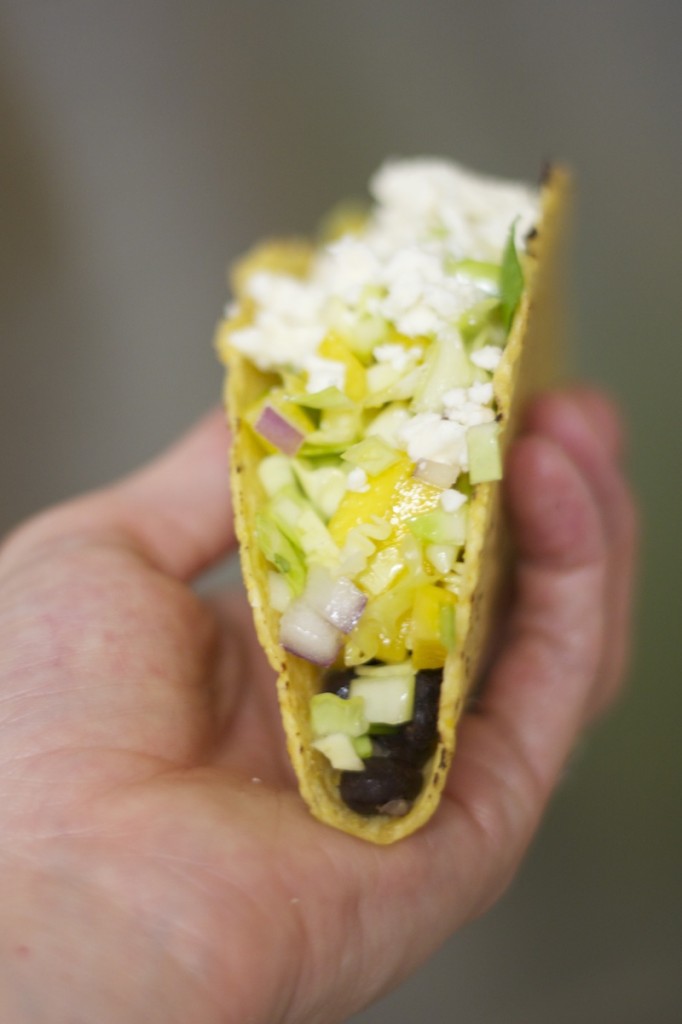 Rather than a single week’s menu, here are a few of our recent favorites and a couple meals I am looking forward to making in the next week or two. As always,  I hope you gain some meal-planning inspiration!

Black Bean Tacos with Feta and Cabbage slaw: We’ve been making these for over a year, and I over time I have learned I love them with a couple big tweaks: I add cinnamon rather than cumin to the beans (so so delicious!) and I add red onion and chunks of mango to the slaw. The whole effect is really “central-american coast” and pretty amazing. Oh, and I usually use regular tortillas as outlined in the recipe, but Dave digs hard-shell, and so we went with them last night. So fun, although I would not be surprised at all to learn there is a name for a neck injury sustained while eating a hard shell taco!

Homemade Falafel: as I was making these, I thought it was a total disaster, because they started to fall apart when in the pan as Mark mentioned. I ended up pouring out most of the oil and pan frying, and although silly looking, they tasted great.

Pepperoni Pizza with Sandwich Pepperoni: Of course, I made our very favorite dough (adding garlic, oregano, parsley and red pepper flakes to it, as usual) and then layered it with bottled marinara sauce, shredded mozzarella cheese, and gigantic sandwich pepperoni (from the deli case)! How can that be anything but amazing?

Lemon Artichoke Pasta: What I did was similar to the linked recipe, although I found that later. Along with artichokes, my pasta also included big chunks of mushrooms. It was awesome.

Grilled Veggie Panini: A nice, basic veggie sandwich. We didn’t use eggplant, and I roasted the veggies in the oven, rather than on the grill. I also used multigrain bread because it’s what I had on hand.

Beef Stroganoff: The recipe I used was not my favorite (read: cream of mushroom soup was used. blech.) but Dave loved it, and loves stroganoff. So, this is the recipe I’ll be using next time it hits the menu. This one looks more up my alley.

Quinoa Cakes: Um. there was nothing about these that I didn’t love. I sort of want to eat them every day. And Milo and Eliot (7 months is old enough for a little quinoa, right:) loved them, too!

Eggs Muerette: I ate this as an appetizer during DC restaurant week and haven’t stopped thinking about it since! That means it’s time to try it at home. (funny side note: I always use real wine when cooking, although I don’t drink any alcohol. I am always surprised when I get carded. And, I always ask silly questions  of my fellow shoppers browsing the wine aisle like “Hey there! So, about how long do you keep an open bottle of wine in the fridge before it’s bad? I mean, if you happen to not finish it?” I was shocked to hear it’s only 3-4 days. What? I guess I should throw out that bottle of wine I’ve had in the cupboard above the microwave for 6 months, eh? Guess I was getting wine confused with liquor, which has a long shelf life.)

Tortellini Spinach Bake: I’m going to put this together tonight and freeze it to eat on Tuesday. I heart make ahead meals!

Southwest Black Bean and Quinoa Cakes: The first quinoa cakes were such a hit, I thought we’d run with it! The avocado cilantro sauce for these looks delicious.

Lasagna Bolognese: This one looks worth all of the hours that go into it. I am reserving it for a Saturday or Sunday, when I have time to tend to the sauce. And I may not make noodles from scratch, because I don’t have a pasta roller…yet. Maybe this is my time to get one?

Avocado Alfredo: While I’ve got avocados for the quinoa cakes, I thought I’d whip this up as well. I love a creamy pasta-and without cream? Even better!

Enjoy your Friday and the rest of the weekend!

Today is the last day to enter the Pretty Little Me giveaway, so give it a try! (I know sometimes it seems like “what’s the point, I never win!” but I also never win, and have won three blog giveaways in the last three months!! There’s nothing to lose:) I’ll post the winner over the weekend, good luck!