Years ago, I went on a mission for my church to Buenos Aires, Argentina. Among the wonderful things I learned as I served was an interesting piece of advice given to me by the President of the mission. During a conference with a large group of missionaries he said the secret to a happy marriage was to “learn to love your spouse, and then love him/her, and then re-learn to love your spouse, and love him/her. Your spouse is ever changing, and if you don’t continue to learn how to love him/her, after time you might not be doing it right.” 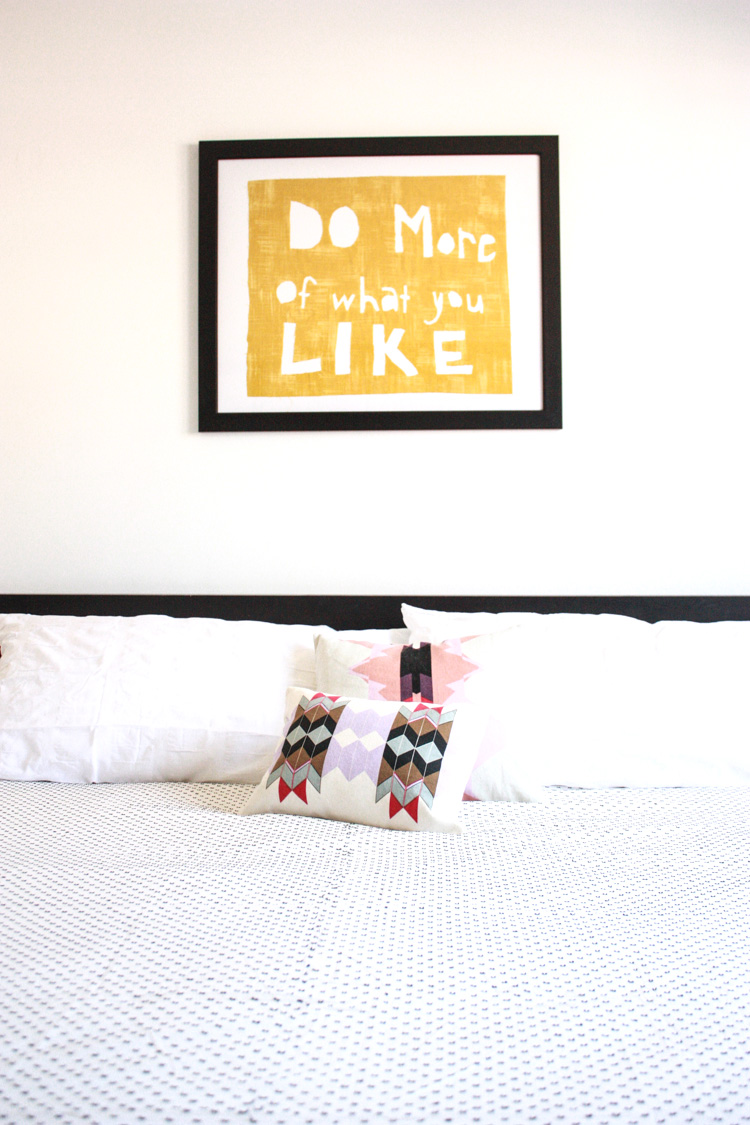 Fast forward to about a month ago. I was brushing my teeth and getting ready for bed. I looked around Dave and my bedroom and realized that it wasn’t quite right anymore. When we first moved into this apartment back in 2009, I painted and decorated everything just as I wanted it, but guess what? I changed. Not only did my style change a bit, but I learned a lot about what characteristics I value about a room: light, organization, and space, all while feeling cozy. Also, over the last four years, our bedroom had become sort of the dumping ground for things that didn’t have a place anywhere else in the house. Boxes and stacks of random stuff that needed to be “out of sight” made their way into our bedroom because it’s the one room in our tiny 2-bedroom apartment that visitors don’t visit. It was time for a little attention, and some intentional changes. 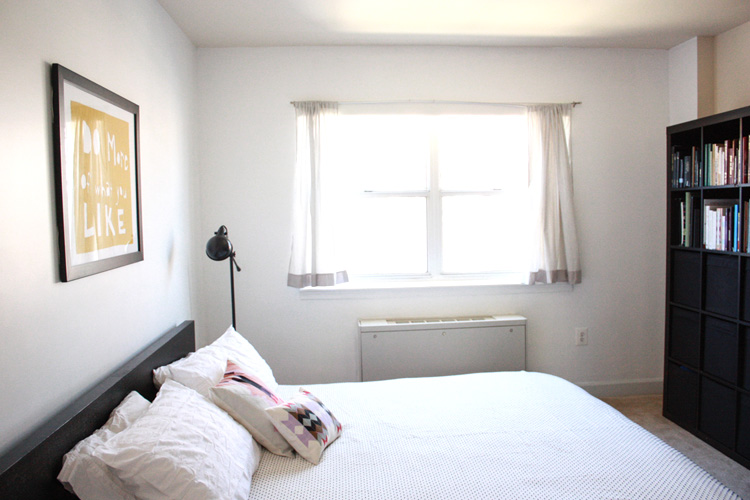 Our cozy, comfortable, yet slightly outdated and sometimes “out of sight” bedroom was the perfect metaphor for what my Mission President had been talking about. When Dave and I were first married, we talked about, planned for, and worked on our relationship all the time. We learned to love each other, and did! Similarly, I had originally painted and decorated our room with intention.

Over the years (really wonderful years) of moving, attending to school, work, and most recently raising our two bundles of energy, our relationship has remained really great, but in some ways taken a back-seat to more pressing matters.

Marriage in general tends to be somewhat “out of sight,” which is healthy. Part of the closeness of a marital relationship is gained in those conversations and moments that are only shared between husband and wife. However, because of the hidden nature of the relationship, it can be easily overlooked, especially if things are rolling along great. Regardless of how well a marriage works, it is important to check in on occasion and “re-learn to love your spouse, and love him/her.”

With all of this in mind, I decided that I would re-do our bedroom as a Valentine’s Day gift for Dave. I wanted to create an intentionally light, airy, organized, and cozy space that would reflect the openness and comfort of our marriage. The bulk of the work was in de-junking and organizing, and that work will be ongoing because we still live in a small apartment and inevitably there will be things that need a place. However, the bedroom will no longer be the dumping ground for the house. It will be a relaxing and intentional room that invites calm into Dave and my life and relationship. The bedroom is still  hidden from visitors, but as Dave put it “It will be hidden because it is special, instead of hidden because it is unorganized.” What a perfect continuation of the metaphor. Our relationship should likewise be held close because of it’s sacred nature, rather than because there is something to hide.

So, now that you know where I’m coming from, do you want to see what I did?

This housing isn’t permanent, so I didn’t want to spend a lot of money, or buy anything fit specifically for this space. In addition to several hours of work, the whole re-do consisted of: 1 can of Behr Pure Ultra White paint, 1 new duvet cover, 2 new shams, 2 new throw pillows, and 1 huge black frame for my hand-cut fabric poster. I spent around $150 total. I think you’ll agree it was worth every penny! 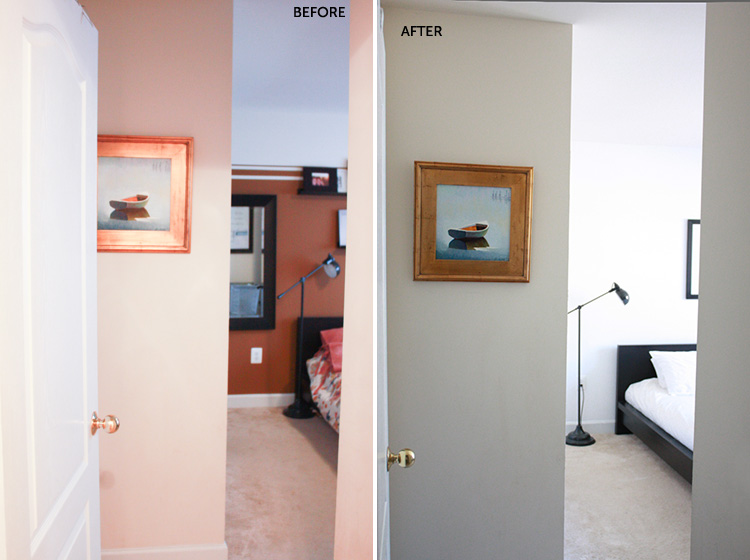 The effect of the re-do can be seen even before entering the room. Where the room was dark and somewhat cave-like before, now it almost looks like the light at the end of the tunnel because of all the light bouncing around on those white walls! 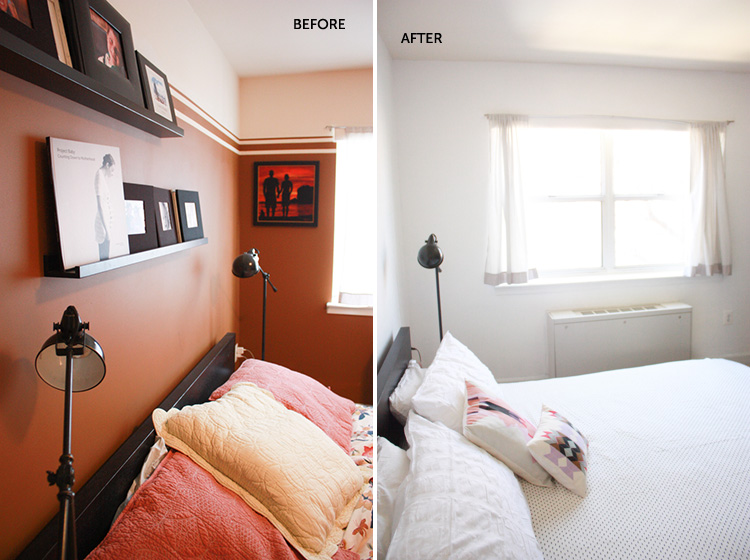 I remember thinking that putting those shelves for our family photo books above our bed were such a great idea! The covers of the books looked like framed photos, so it felt like a double gallery-wall + bookshelf. Genius, right? Well, the problem was that we hardly ever took them down to look through, and so they just got dusty and cluttered. I much prefer having them down in the actual bookshelf and freeing up the wall over our bed to feel really open.

As far as the brown walls with racing stripes, I really can’t remember what I was thinking except for that I thought the technique of creating the stripes would be fun to try! I must have chosen the chocolate color to coordinate with our floral bedding…? I have painted a lot of walls and never once done those test patches (so sometimes I’m surprised a bit by the color) but I feel like I’ll just go with it. And honestly, I know I at one point I really loved the brown. Now, I really love the new, crisp, white walls. Hey, people change! 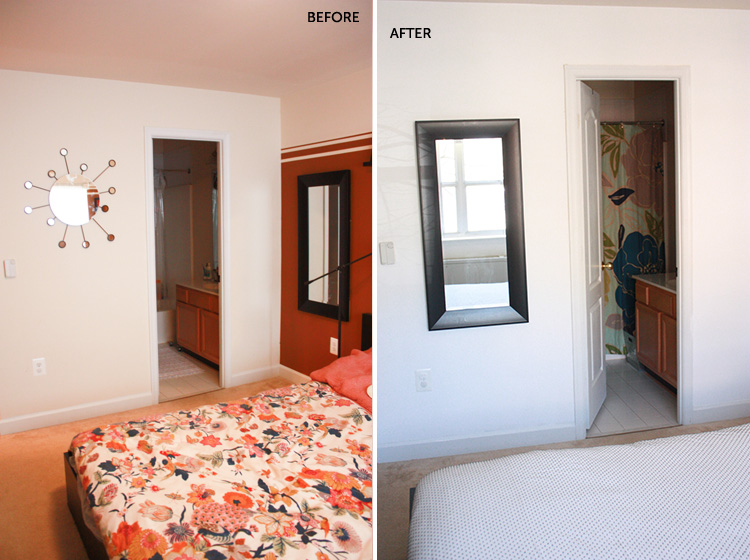 I had to do some mirror shuffling because I love our big mirror, and use it daily. However, it fit much better on this side wall, replacing the starburst Ikea mirror (that I found by the side of the dumpster while taking out the garbage a few months ago…if that gives you some insight into my decorating style!) 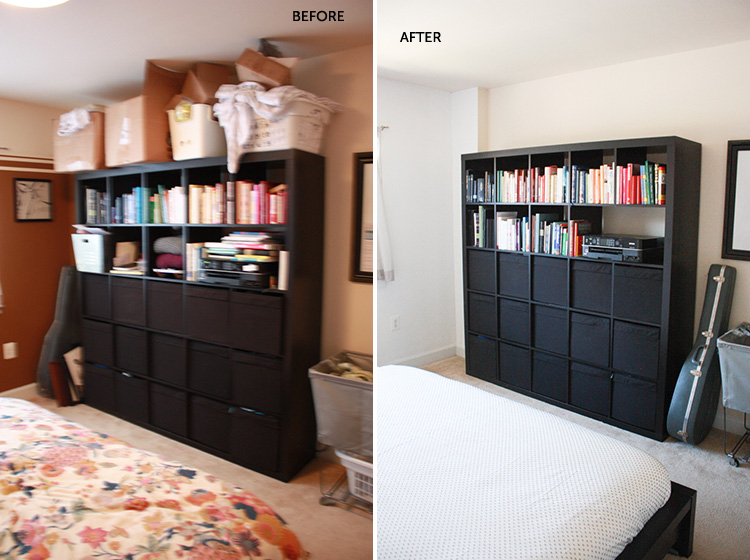 Dave and I have called this huge bookshelf the “qi-suck” ever since we put it in our bedroom. We needed storage space and spotted this shelf on craigslist for free! While it does provide wonderful storage, it also so easily became a black hole for all of that unidentified stuff that needed a home. This is where the most amount of organizing and de-junking took place, and I’m so happy to have freed it up to once again be a great, organized storage space. I made space for most of the boxed goods by de-junking and totally reorganizing our walk-in closet.

The corner behind the shelf was another pile-zone, and I wanted it to be open space. After the re-do, the only thing in the room that has a true home on the floor is my guitar. Neither of us are very good at playing, but both of us want to be someday. My dad, who is an amazing guitarist, took me to a pawn shop years and years ago to buy this guitar, and the vintage case that it now live in once held one of my dad’s first guitars (if not his very first?) So, either as hope for future talent, or as a sentimental treasure, the guitar gets a place in the room. 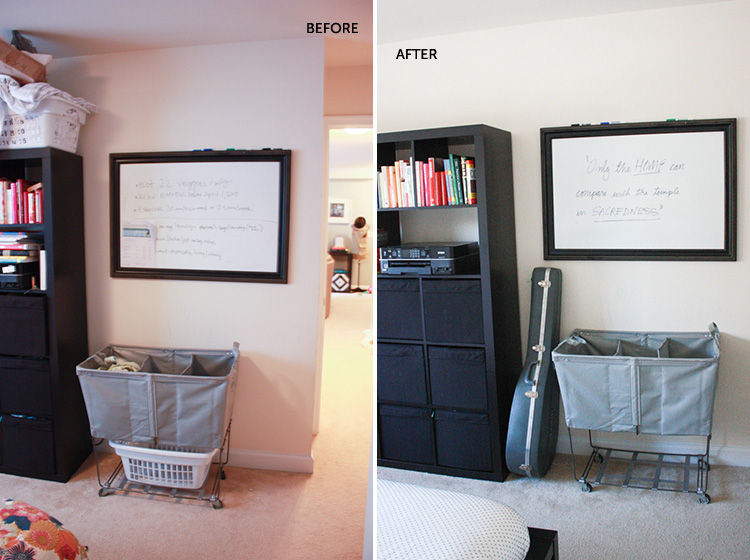 I am still completely smitten by our custom Steele Canvas laundry bin. The white board above it needed some attention, though. I wrote some goals on there..eh, maybe in October, and never had erased (or accomplished) them. We had also begun sliding documents into the frame (undoubtedly because of the state of the bookcase). The important docs are now back in their files, and the white can go back to being a tool for inspiration and progress. (Dave scrawled a quote referenced in this talk up there, and I love it.) 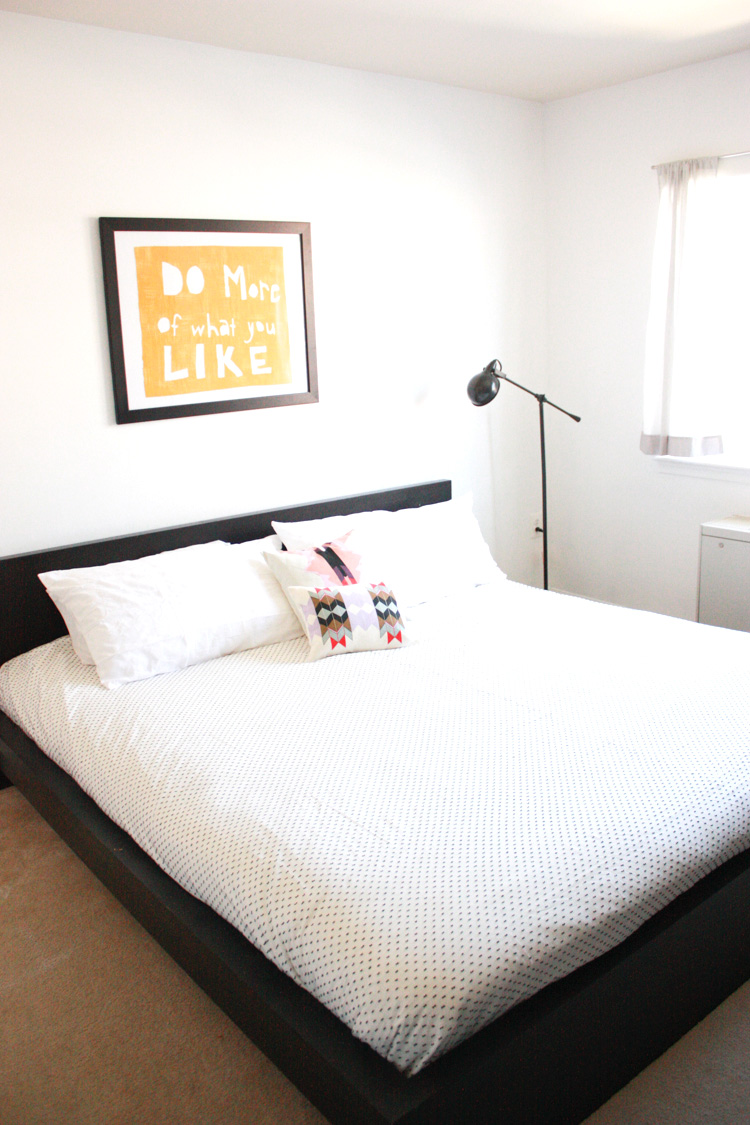 The only art that hangs in the space is my fabric poster. The phrase is so meaningful to me because of all of the introspection that it invites. Until I posted a before/after of the room on Instagram it hadn’t even crossed my mind that it would read as a sexual quote, but I think hanging it above the bed invites that connotation. I actually think it works though, right? In life, in marriage, and in the bedroom, “DO more of what you LIKE!!”

Even though I joked with Dave that this Valentines Day gift was for “him/us (but mostly me),” as I talked to him about how I really wanted to create a space that we would love; that would no longer be set aside as the dumping ground, but would be maintained as special, he understood that the real gift was not only refreshing our bedroom, but committing to re-learn how to love him, and doing it.