Okey Dokey. Here we go with a review of the holiday weekend. With Dave’s new job, for a while we can only take vacations on ACTUAL holidays, which is a totally different mentality from being in school when it felt like we could head out whenever we wanted. So, I plan on taking advantage of every holiday that rolls around with some sort of getaway. This trip was especially fun because we got to spend time with family. Lucky for us, they’ll be in Boston and Dartmouth for at least a couple years, so we’ll definitely get up there again. 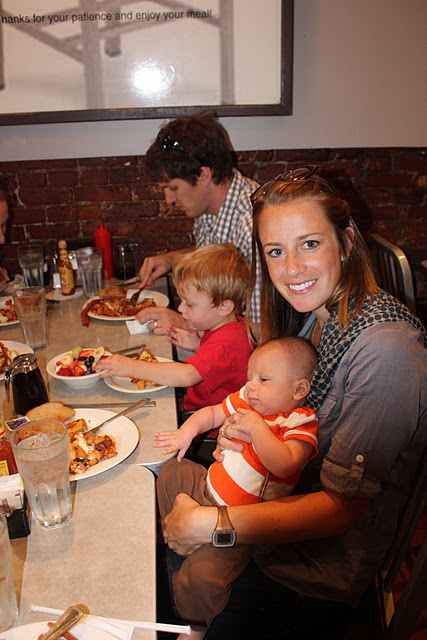 I adore Boston, and am comfortable there because of so much time spent in the city when we lived in New Hampshire. I love when I get to know some of the fun, little things about a place. Like the French Toast at The Paramount on Charles Street. I don’t even put syrup on it. And I love syrup, it’s just that good. 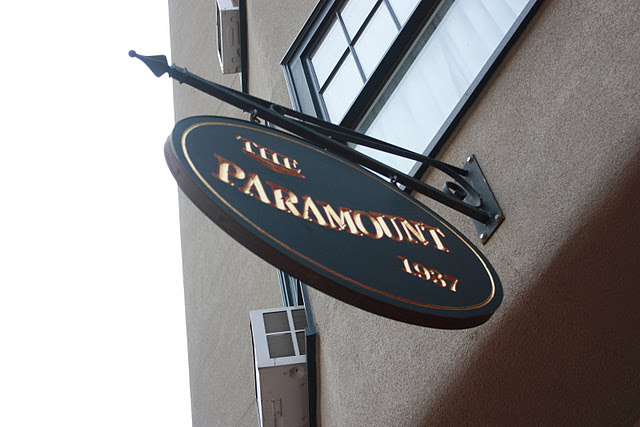 Across the street from the cafe, and up a few blocks, there is a little store that I adore. Black Ink. It’s filled to the brim with the most random, genius things. Like a mini tape dispenser. I didn’t know what I had been missing! I also bought (after much deliberation, leaving the store, going to the one in Cambridge on the way home, leaving again, then taking a bike back with Dave minutes before close…) peel away crayons, a sailor knot tying kit, a few display clips, and metal push pins. All unnecessary, useful items. 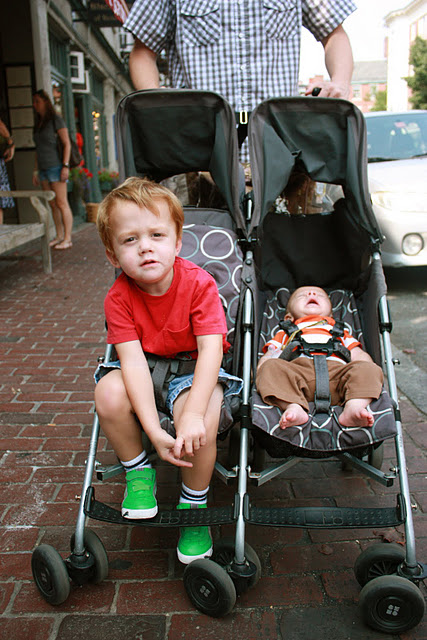 We wandered from Beacon Hill over to the Boston Garden to visit the ducks. I couldn’t survive without the double stroller (and I am super tempted by this one, so Milo couldn’t put his feet down on the ground every two seconds!) 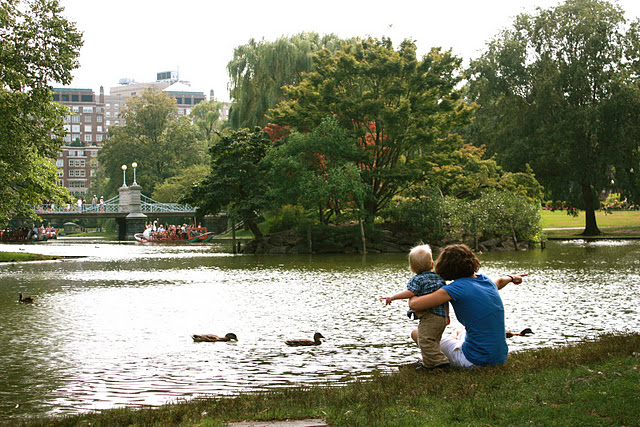 There is nothing better than autumn in New England. I adore this scene with Kate and her cutie Alden. That tree turning colors in the middle of the pond makes me want to pull on a sweater and sip some homemade cider. 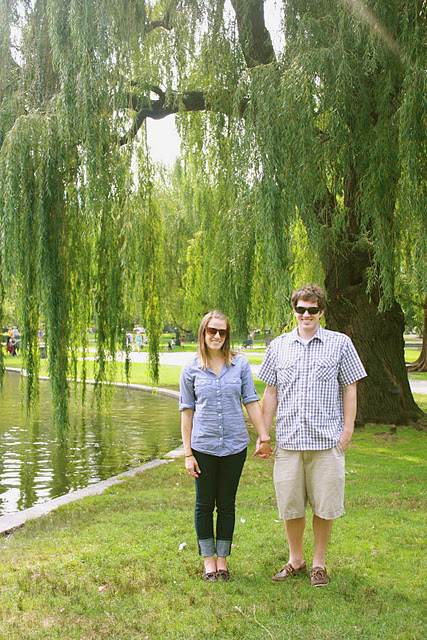 Me and my love.
It’s been a while since we had a decent photo taken, just the two of us. I love this one. (Funny side story: When I looked at it the first time, I noticed a person in the background next to that tree. When I zoomed in on photoshop to clone stamp her out, turns out it was a mom just getting ready to pull her daughter’s pants back up after, what I’m sure was a potty-training moment!! It’s not graphic, but for the sake of decency I’ll not share. Pretty funny, though. Sarah took about four photos in a row, and in each one the little girls drawers get higher and higher, until she is once again fully clothed:) 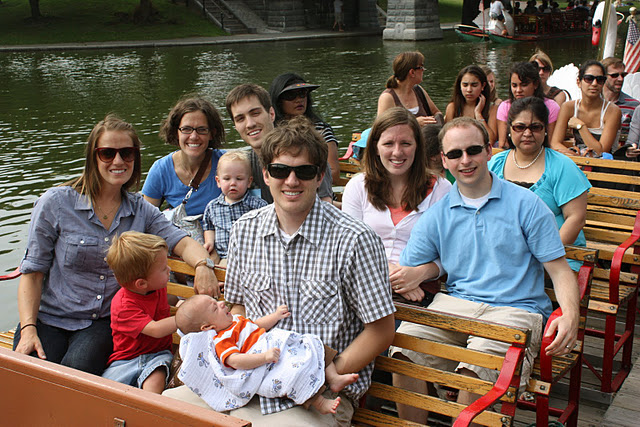 Here we are on the Swan Boat. I’ve been in the Garden a hundred times, and this was my first trip on the boat. It was great:) 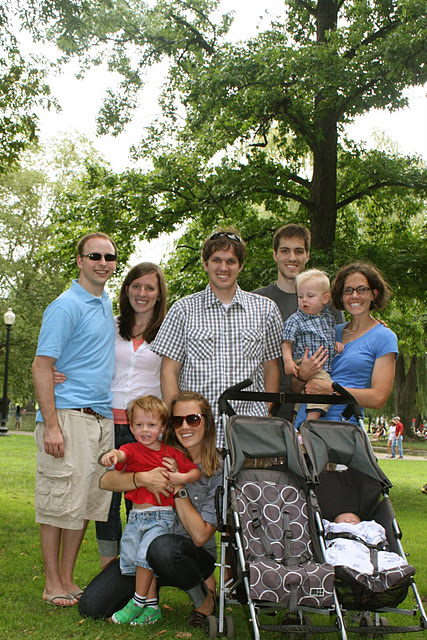 The whole crew. Sarah and Ryan are newlyweds and just moved to Dartmouth. Kate, Eric and Alden are recently settled in Cambridge. And we appreciate the woman waiting a full few minutes before taking this shot to ensure Milo was looking at her! 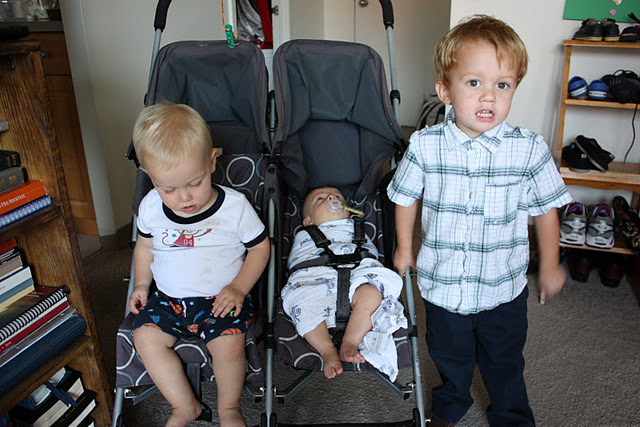 This one is for the Grandparents. Clearly, I did not wait a full few minutes for cooperation:) 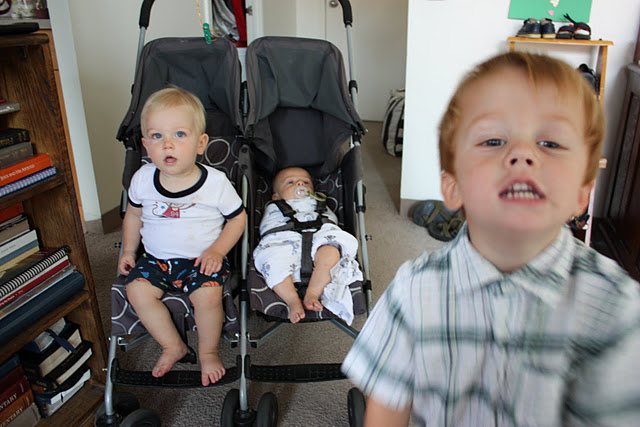 This is as good as it gets! 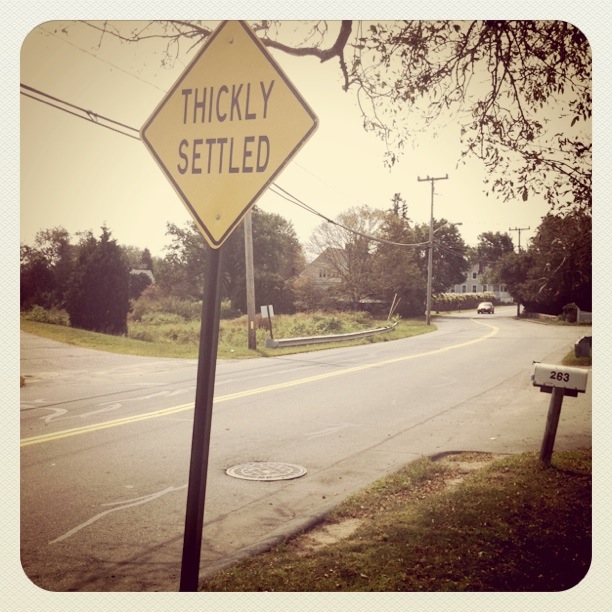 After a night, a day, and a night in Boston, we headed down to Dartmouth to check out Sarah and Ryan’s new stomping ground. Man is it awesome. Tiny, peaceful, picturesque. They live right across the street from the end of the Apponagansett Bay. This sign sits right in front of their house. Any guesses what that tells a driver? 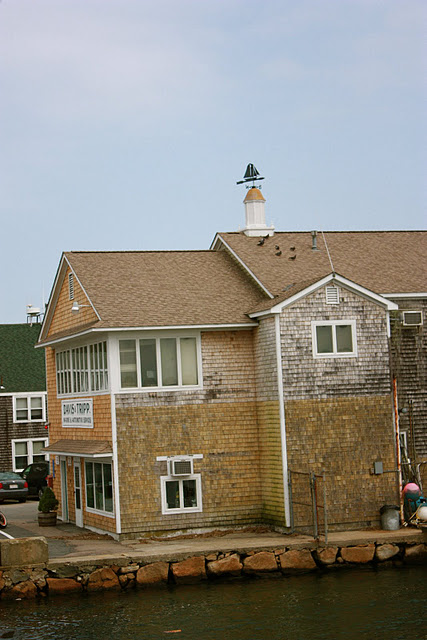 It was Sunday afternoon and we drove down to the harbor at Padenaram (pronounced pait-en-ehrem) and looked at the boats, enjoyed the charming buildings, and chatted with the fishermen. 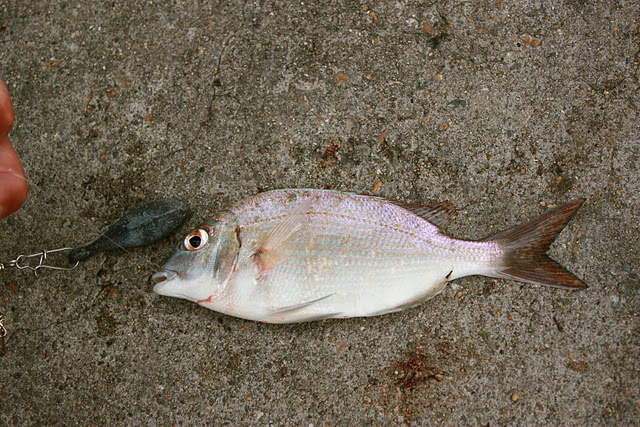 Okay, I lied. We didn’t “chat” with the fishermen at all. I tried to strike up conversation by asking if this teeny tiny fish dangling from his hook was “bait to catch a bigger fish?” That didn’t go over so well. Turns out that WAS the fish, freshly caught. And I think he was proud of it. 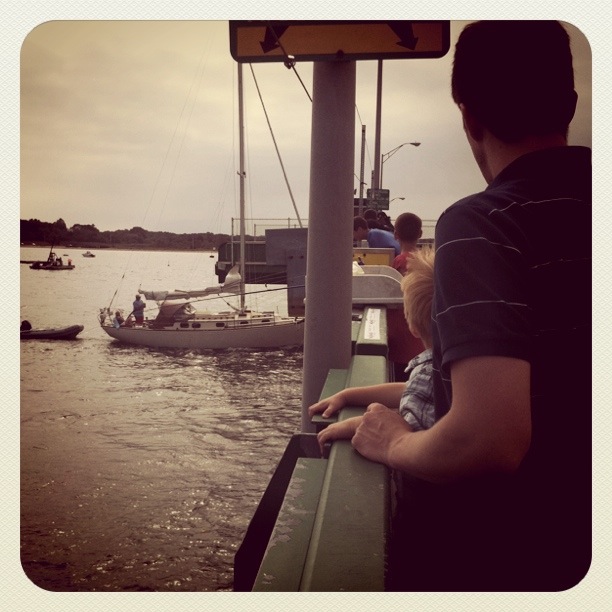 We also got to watch a sailboat pass right through the rotational bridge. It was awesome. Dave has decided he’s going to become a sailor. I can’t wait:) 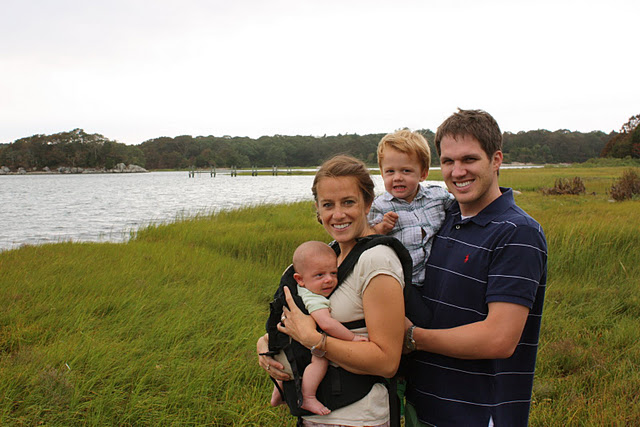 Later, we took a toddler-friendly hike in Allens Pond to see the view and skip rocks. 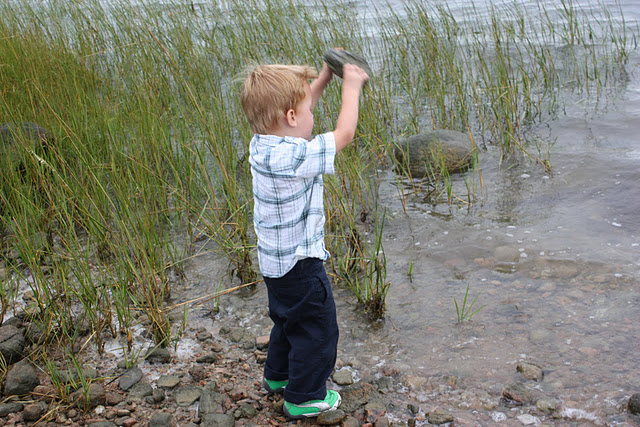 Or boulders in Milo’s case. 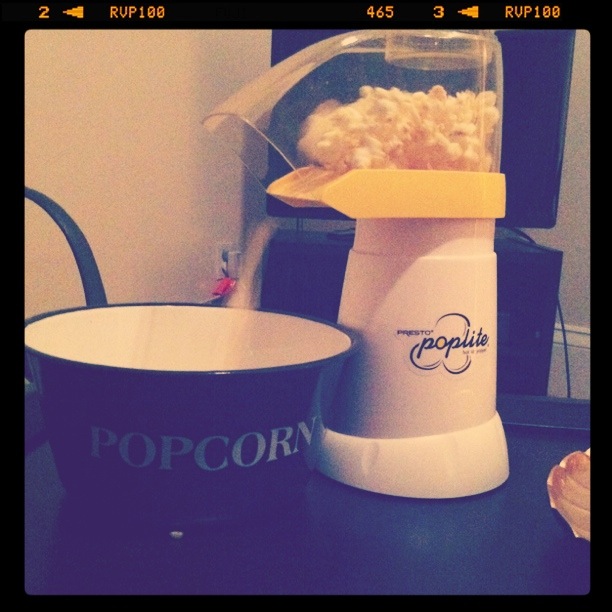 After the boys were in bed, which was quite a feat, we settled down with some air popped popcorn. And then we added to it: peanut butter, melted butter…oh, and a little drizzle of chocolate. Then we still just called it “popcorn”  and didn’t feel guilty:) 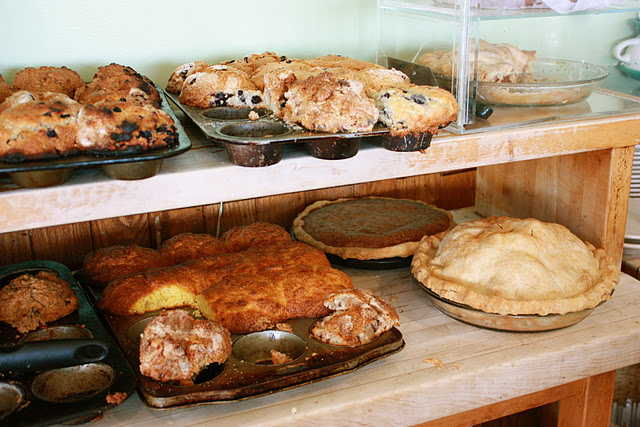 Labor Day morning, Sarah and Ryan took us to the most wonderful breakfast joint, The Bayside Restaurant. I walked in and had a love-at-first-sight moment with the blueberry muffins. Seriously. 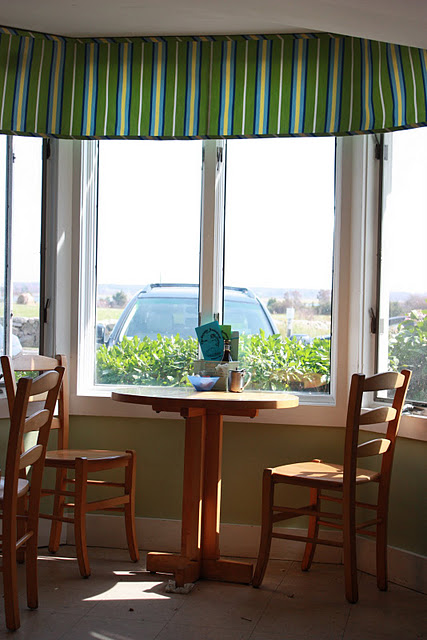 The interior was laid back and beachy. And the food was delish. 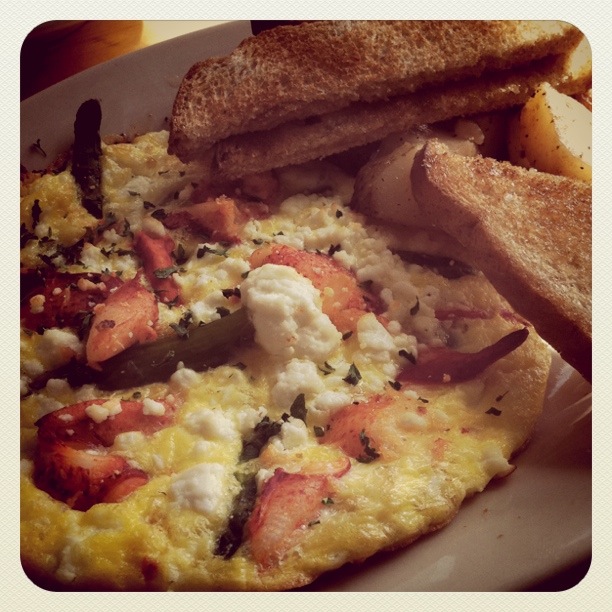 Thank you New England, for the lobster, asparagus and goat cheese fritatta. And the blueberry muffin was as good as it looked. 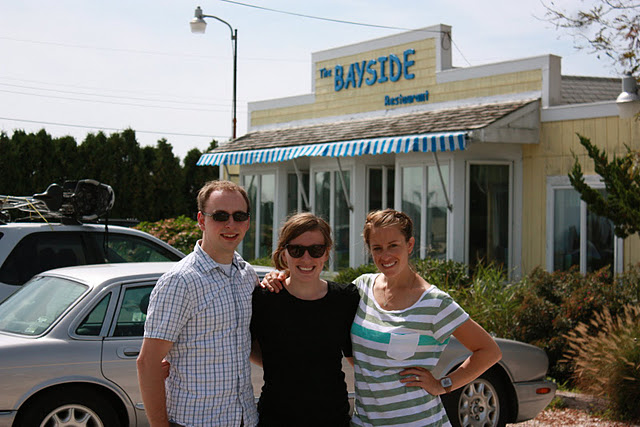 On the way out, I asked to buy a muffin to go, and it was simply handed to me with a smile and a “Don’t worry about it!” We will definitely visit again. 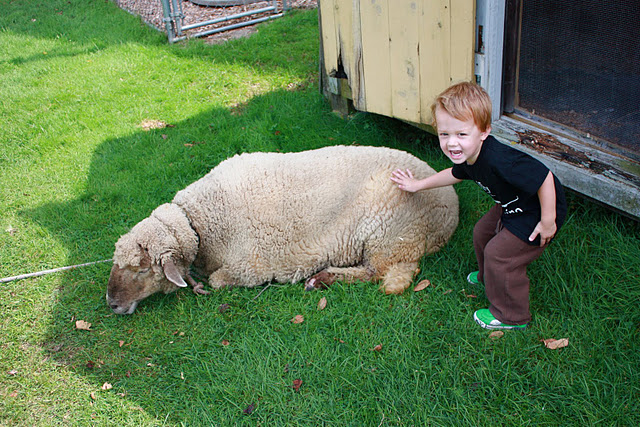 For our last adventure in Dartmouth, Sarah took us to the farm where she frequently buys her groceries (ah, the simple life!) It ended up having a full farm’s worth of animals that she hadn’t noticed before. Milo was in heaven. Several of the animals were docile enough to be simply tied on ropes in the open, so we got to pet a few. Milo’s face says it all. 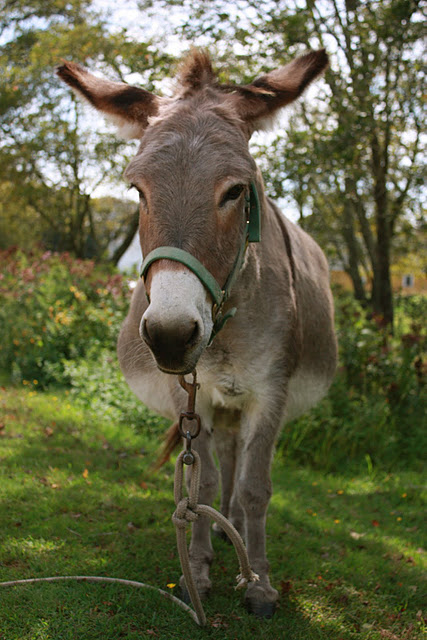 Since we were heading back that day, I took away some fresh heirloom tomatoes, local red potatoes, carrots and a jar of home made jalapeño jam. Farm fresh and wonderful.
Quite a trip, right?
We smashed a lot of fun into our 50 or so hours (apart from the 20 we spent in the car:) Can’t wait to do it again! When’s the next long weekend?
Share
Family  / New Hampshire  / TRAVEL
© Copyright 2021 Live Free Creative Co | View our Privacy Policy